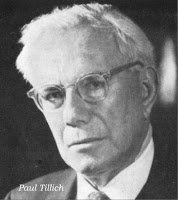 Paul Raymont of the blog Philosophy, lit, etc. links to a series of interviews with important figures from the past, including Paul Tillich and Reinhold Niebuhr.
I don't know too much about Tillich, so really the main thing that stuck out for me in the opening lines of the interview (which is all I have watched so far) is his statement that one of the reasons why he left Germany for the States in 1933 was his express conviction that the Old Testament is an abiding theological witness for the church (to use Chris Seitz's phrase; I think Tillich just said it is "valuable"). This comment stuck out for me, not just because I'm a Christian who studies the Old Testament, but because I do that hand in hand with a hero of mine: Brevard Childs. Childs himself, it seems, was critical of Tillich on just this point. Here's what he had to say, in the context of a broader discussion about the relation of Scripture to the Reality it witnesses to:

P. Tillich speaks freely of the reality of the New Being which conquers existential estrangement and makes faith possible. Jesus as the Christ is the symbolic expression of this New Being, and the biblical portrait of this symbol mediates a knowledge of God. Participation, not historical argument, guarantees the event on which faith is grounded as a sign of the continuing transforming power of this reality once encountered by Jesus' disciples. That the Old Testament plays a minor role here is apparently taken for granted.

Given my ignorance on such matters, I don't want to judge whether Childs has got him right on this matter or not. But it just goes to show that affirming the Old Testament theologically in theory is one thing, but doing this in practice can be another thing altogether.
Posted by Phil Sumpter at 14:54

I've read a decent amount of Tillich, and I'm very surprised by his statement on the OT. I've never considered him to be heavily invested (or even mildly invested) in the OT's abiding witness or as anything other than intimations of Christ's existential act. I think Childs is right. Of course, Tillich didn't really believe in a God "out there" coming "here" and acting/intervening/revealing, so this invariably affects his estimation of what exactly the OT is. Childs and Tillich have very different ontologies of the OT.

thanks for your comments, I find them helpful. I'd be interested to hear whatever you have to say about "ontologies of the Old Testament" (I certainly agree with you).

I once read a well-known philosopher (I can't remember the name) who said that Tillich was the first atheist to pass as a theologian. :)

I think Tillich is highly fascinating because he was the first "theologian" to consistently accept a positivist conception of reality (i.e., a reality closed-off to any other reality). He takes Kant and Comte to their logical ends. Thus, for Tillich, there is no such thing as a foreign agency (God) acting from his own self-determination. Rather, the human will alone is capable of assessing the "ground of being" ("God") and, thus, realizing God in his or her life. As such, Tillich's God is the opposite of Barth's God.

If you want a brief, easy-to-read introduction to Tillich, you should buy his short book, Dynamics of Faith. I'm sure that you will enjoy it. As much as I disagree with Tillich, I love his writings. He is always clear and honest.