Contemporary Islam and the Modern Middle East: An Interview with Bernard Lewis 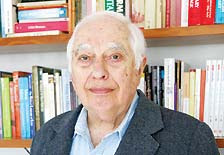 Bernard Lewis is an internationally acclaimed expert on Isalm and the Middle East. You can read a fascinating interview with him by the Jerusalem Post here. He discusses the role of women in the Middle East, attitudes to Israel and America, contemporary trends and future developments. He talks of the need to distinguish between Isalm as religion and Islam as civilization, and the perversion of true Isalm by fundamentalists. Here's his conclusion, a summary of the challenge that lies ahead.

People of my generation have not forgotten Neville Chamberlain's Munich Agreement with Hitler. That was a perfect example of "preemptive cringe" diplomacy. It was the sort of thing which gave the previously innocent word "appeasement" a bad name.

What we are facing now is the third major threat to the world. The first was Nazism, the second Bolshevism and now this. There are parallels. Germany is a great nation, and German patriotism is a perfectly legitimate expression of the pride and loyalty Germans have for their country. But Nazism was a monstrous perversion of that and a curse to the Germans, as well as a threat to the rest of the world.

The aspiration for social betterment and social justice is very noble. But Bolshevism was a monstrous perversion of that, as well as a curse to Russia and a threat to the rest of the world.

Now we have a third similar situation. Islam is one of the great religions that sponsored one of the greatest civilizations in human history. But it has fallen into the hands of a group of people who are the equivalent of the Nazis and the Bolsheviks. They are a curse to their own people, as well as a threat to the rest of the world.

Hat tip Kevin Edgewood, via The Biblicalist.
Posted by Phil Sumpter at 12:56

I'm glad you like the article, Phil Summer. (that's a gentle hint)