Shin Bet Have a blog 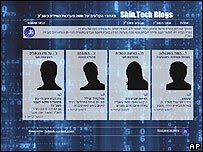 According to this BBC article, the Israeli secret service agency has set up its own blog.

The agents discuss how they were recruited, and what sort of work they perform; they also answer questions sent in by members of the public.

A Shin Bet official told the BBC that the idea was to inform the public that the agency offers work beyond just stopping Palestinian paramilitary attacks.
The official said that the agency had been cheered by the feedback from members of the Israeli public - keen to find out more about the jobs within Shin Bet, the pay and even the food.

I'll have to work on my modern Hebrew a bit to figure out what they're talking about!