My take on "verbal revelation" 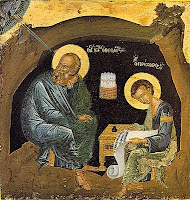 I recently quoted James Smart, who claims that

revelation is in the text itself, in the words ... It is through these words and no others that God intends to speak to us, and, when he does, we know that there is no other kind of inspiration than verbal inspiration.

Criticisms were made in the comments. Particularly insightful were those of Bob Macdonald:

Torah is not text but engagement with the one to who the text points. The medium is neither the messenger nor the source of the message (emphasis mine).

Nevertheless, what does it mean to say that “God is with us”? What is the nature of this reality? Our dogmatic assumptions must shape our approach to the text.

In the Bible, God's self revelation is seen as progressive (Exodus 6:3). The “one to whom the text points” is a profound being (Andrew Louth puts it eloquently here), one that needs to be sought. He certainly reveals himself suddenly and without expectation—and still does!—but he also hides himself and wishes to be found. In the Old Testament he is to be sought at specific places: cultic centres and ultimately the temple. He also reveals himself through the laws of the universe (the burden of Wisdom literature), through his written Torah, through the example and teaching of elders, priests, and parents. Within this universe, text is at least one medium of revelation.

Within this unfolding story of the Bible, however, we see that texts take on more and more significance. Moses receives his revelation directly from God, but he writes it down and the text becomes the vehicle of ongoing revelation and guidance (see my post, God, Moses, and Scripture). According to Jer 36, Jeremiah has his prophecies written on a scroll which survives to speak to new generations. C. Seitz summarises the implications of this chapter as follows:

the chapter tells of the victory of the Word of God. The king can kill prophets who speak God's word (see Jer 25:23); he can debar God's spokesman from the temple (Jer 36:5); he can callously burn God's word in a brazier until the entire thing is consumed (Jer 36:23). But the prophet lives to speak the word anew, and the scroll is recomposed (Jer 36:32). And more to the point: the new scroll will outlive the divine spokesman and the evil generation headed by Jehoiakim. In the end, God's word cannot be thwarted (ZAW 101:1, 1989, p. 14).

just as Joshua brough new tables of the tôrāh to a new generation in a new day, so too the scribe Baruch symbolizes the survival of a new scroll from the prophet Jeremiah which will address a new generation of faith “in all the places to which (it) may go” (Jer 45:5) (p. 18).

He concludes that in Jer 45

we see a foreshadowing of the movement of prophecy into a new mode, as clarified in a later rabbinic dictum: “Since the day when the Temple was destroyed, prophecy has been taken from the prophets and given to the wise” (B. Bathra 12a).

We need to add to this our growing understanding of the nature of Biblical tradition itself, which went through a process of textualization or “inscripturation.” We see this in particular in the case of the “Book of the Twelve.” The “reality of revelation” within time and space to particular prophets is one thing, but within the context of God's economy of salvation it seems that the witness to this original Word has been enriched and expanded so that its true dimensions, understood with the advantage of hindsight (e.g. exilic redaction), find literary (“verbal”) expression in the final form of the text.

This is the conclusion of a scholar not known for his commitment to “synchronic” reading: Jörg Jeremias. See his comments on the literary (though not "historical" - in the narrow sense of the word) interrelation of Hosea and Amos:

The curiosity of the modern historian about the specific and singular elements in one prophet was quite alien to the traditionists. They did not want the words of either Hosea or Amos to be read with historical interest for a distant past but with a current interest in their words as a help for present problems. They were asking about the one message of God by two messengers (but without creating something like Tatian's harmony of the gospels). … (1996: 181, 182-183)

(I've posted a similar quote by Jermias in German, in Canon and the essence of prophecy)

This is simply a brilliant way to express the key concern of Childs' canonical approach. See also my thread on New Testament scholar Paul Minear, who holds that the Bible's view of “reality” should challenge that of the historian's - with hermeneutical implications.
Posted by Phil Sumpter at 13:40

Phil - thanks for the continuing conversation. In some ways, I think that is what God has going with humanity through revelation - a continuing conversation. The curious reference to Christ and Moses in chapter 11 of Hebrews raises for me an insight into the present of God in all time: that this God can be represented as anointing, and the sacramental aspect that goes with it (Psalm 133).

On the subject of this post - I wonder if the restriction to "specific places: cultic centres and ultimately the temple" is a response of priestly religious control on those pesky singers and dancers and vergers represented by Korah or even David (and his dancing before the ark Psalm 132) in fact, all the writers of the psalms. They are not limited in place (Psalm 4:4, 149:5). True - we can, as Hebrews does, reinterpret as Christ crucified the meeting place symbolized for that writer in the mercy seat of the tabernacle. So also to avoid rabid individualism we must find a way to interpret the 'place where I will make my Name to dwell' when the visible temple that manages more than one worshiper is not apparent.