Questions for Barth on the unity of Scripture 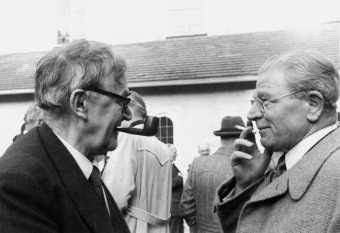 I'm currenty re-reading my notes on Hermann Diem's excellent Dogmatics, which is less a treatment of the doctrines of the church as an analysis of the nature of dogmatic theology itself. I'm particularly interested in his treatment of Barth's approach to scripture, as I'm convinced this played a foundational role in the development of Childs' so-called Canonical Approach (he references the book in a footnote at a critical juncture in his article "Interpretation in Faith" [1964], available on ATLA).

Diem rhetorically poses Barth the following five questions (pp. 98-100) on the nature of the unity of Scripture, along with how he surmises Barth would have answered:
Q 1) But in what does this unity consist?
Barth would have to reply that it consists in the fact that all these texts bear witness to the one Christ, though he would certainly not disagree that they do so in different ways.
Q 2) Does this unity consist only in the words and acts of Jesus Himself, or also in the witness of the NT authors?
In light of Barth's assumptions, the answer would be that the illuminating unity of the witness to Christ must be presupposed despite the obvious diversity of the witnesses, but that it cannot be demonstrated by the method of historical comparison, since, on the contrary, this alleged unity alone makes possible and checks the comparison.
Q3) But when the historical comparison leads to such different conclusions, how can this dogmatically assumed unity act concretely as a norm?
Barth can't extricate himself from this by saying it's just a matter of the “how” and not the “what”. Barth equates the question of historical truth with that of the true meaning and continuity of the Biblical texts, in connexion with which he is thinking primarily of each individual author. Thus even as regards the comparison of the texts it must be true that historical truth is also theological truth, and conversely. He would say, and in fact would have to say, that historical study, if well done, cannot challenge this supposed unity.
Q 4) But then, what about the studies that contradict this?
We do not know what Barth would say to this, and so will endeavour to think out the question further for ourselves.

It cannot be Barth's opinion that such normative authority would simply flow from a concordance of Biblical texts, since this could only mean a levelling out of their concrete individuality, on the elucidation of which through Biblical theology Barth places such emphasis. But if Barth avoids this method, must he not have some other norm by which he appraises the values of individual Scriptural texts? But this attempt to find a canon within the canon he also rejects, even if it were derived from the canon itself—as for example, the doctrine of justification—because this would mean fettering the facultas semetipsi interpretandi of Scripture. Nor could he consider as such a possible norm the preaching of the historical Jesus, since this is accessible to us only in Scripture, which we must not seek to get behind.
Q 5) But in this circular argument—which states that dogmatics must test present day preaching as regards its accordance (a) with the word of Scripture, and (b) with revelation, which is apprehensible only in Scripture—how can we find a norm for dogmatics?
Barth repudiates critically ordering and interpreting in detail the Biblical texts from a systematic viewpoint derived from the Bible itself.
In his Church Dogmatics, Barth discusses these issues. Here he attempts to distinguish his definition of the Word of God as the formal principle of dogmatics from a material Biblicism, and says: "Dogmatic affirmations must have a Biblical attitude." By this he means "the mode of thinking characteristic of Prophets and Apostles. It is the attitude not of observers, reporters or philosophers, but of witnesses, of men who, whatever they say, originate from the reality of the Word of the Lord, as of something absolutely given, and speak with the impetuous power of a torrent rushing down the mountainside” (Die christliche Dogmatik, 1927: vol I.I, 435). Here we are faced by "a form of thought, to think in which the dogmatist must learn to practice, as anything else is learnt. But, what is more, a form of thought which does not appear in other connexions, and in which we cannot learn to think except in the school of witnessing Apostles and Prophets" (ibid. 437). The Biblical attitude is something "to which we can grow accustomed only by the exegesis of Scripture itself, just as a new-born child accustoms itself to breathe and drink" (438). But this Biblical attitude as the determining factor in dogmatics cannot spell a material Biblicism:

"At its climax, where exegesis must pass into original thought, a dogmatics which limits itself to being merely a Biblical exegesis, inevitably becomes the pious word of the man of today, to qualify which is, however, its very business. All too often, material Biblicism has in fact made an arbitrary 'Sic volo, sic jubeo,' the first and last word of the dogmatist who adheres strictly to the Biblical text, and has caused historical, psychological and speculative thought to reign unhindered as though dogmatics were non-Biblical; and dogmatics, qua critical discipline, has thus neglected its very task. It should not be forgotten that whereas material Biblicism is quite a modern phenomenon, only too closely related to the psychology of religion, the Biblicism of Reformed dogmatics, for example Calvin's, is clearly distinguished from mere exegesis, and in distinction from preaching and exegesis invites us to a Scriptural attitude of thought which is formal Biblicism" (439).

I have to confess, these are tough ideas for me to get my head around. Oh, and if any Latin expert could translate facultas semetipsi interpretandi and sic volo, sic jubeo I'd be grateful!
Posted by Phil Sumpter at 22:35

BlueHost is ultimately the best hosting company for any hosting plans you require.