History and ontology as the subject of Scripture 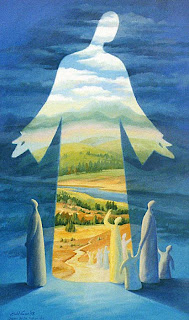 This post continues my analysis of Christopher Seitz's recently published Prophecy and Hermeneutics. Each post can be read on its own, but it may be best to read them together. For an overview go here.

Seitz's central theological category for thinking about the subject matter of Scripture is “time.” His understanding of time, however, breaks with the traditional Enlightenment model which understands time in terms of “discrete and particularized periods” (35). For the earlier critics since Gabler, “Time becomes history, with a special character and with tremendous expectations placed on it theologically and more generally” (35). Though Seitz wishes to maintain the theological significance of time, he rejects this Enlightenment model and strives to return to an earlier model:

An interest in temporality had of course always marked interpretation of the Bible as a theological and dogmatic endeavor, but it was directly related to more decisive claims about the character of God. … Time was previously understood according to not just economic but also immanent and ontological considerations, and these were seen as subsisting together in , and revealed by, a complex network of scriptural senses (35).

This more ancient understanding of time is more in line with that of the Bible, which wishes to witness to the “history of the prophetic word in Israel and the world, under God's providential care and final purpose” (219). This has hermeneutical implications for the late-modern interpreter. We need to go back to school, as it were, a rediscover

a form of historical interpretation of the prophets that will … try to comprehend just how the prophetic canon is offering its own very sophisticated version of history (72).

Seitz's thesis about the nature of Biblical history is that it is inherently figural. The Bible does not overly emphasise the particular nature of temporally discrete periods, rather it coordinates them according to “a theological account of the significance of history, seen from the perspective of several centuries” (50). I will discuss the hermeneutical implications of this insight into the “coordinated” nature of the text in another post. For now, I want to focus on the broader “comprehensive theological account” afforded by the Bible's canonical view of history as the goal of exegesis.
According to Seitz, the messengers of God's word are “participant[s] in a drama larger than [themselves]” (245); they belong to “to a larger history and sweep than they as individuals were able to recognize at the time” (242). The function of secondary levels of tradition is to “figure” these “elected agents” into this larger theological reality. The deeds, words, and events of the prophet's lifetime are understood within the broader context of God's providence, within “a larger history of God's ways with his people” (190).
I will focus on the way in which the Bible does this in a later post. My next post will give examples of the theological reality to which the “consolidated witness” (17) of Scripture is pointing.
P.S. For a more philosophical analysis of the problem of "time," especially as understood by the Venerable Bede and the Enlightenment, see the two fascinating posts by Tim F. of The Moving Image. The first is Rome Paper Part 1, the second Scripture and History. I posted a tantalizing excerpt here.
Posted by Phil Sumpter at 16:36

Efigênia Coutinho ( Mallemont ) said...
This comment has been removed by a blog administrator.
3 February 2009 at 15:29