The challenge of figurative interpretation: an example 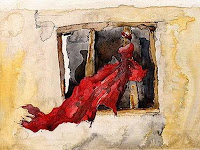 Before I touch on this, I'd like to refer to the comment section of my last post on The "horizontal" and "vertical" nature of the Old Testament witness. Michael has responded with some excellent questions, to which I have responded in depth.
Now to the title of the post:
The challenge in question is the challenge the concept of "allegorical" or "figural interpretation" poses to the task of theological interpretation itself. As Daniel Treier points out, "Without the practice ... we cannot read Scripture religiously as a unified canon" (Introducing Theological Interpretation of Scripture, p. 50; my own review is forthcoming). Yet, there is still debate as to how one ought to go about doing it. Again, as Treier says: "How to handle the legitimacy of typological and/or allegorical interpretation becomes a major concern for theological interpretation of Scripture" (p. 50). He gives the following examples:

Some once read the number of Abraham's servants - 318 (Gen. 14:14) - in such a way that it pointed to Christ. On the arbitrariness of this, we might think, most theological interpreters today could agree. What, then, about Rahab's scarlet cord? Does it point to the blood of Christ, as Clement of Rome suggested, and if so, how? Many critical scholars might assert that there is no connection at all between the two, for the Old Testament writer could not have had the later event in mind. By contrast, many precritical interpreters would find such an association clearly willed by the divine Author. Is the color of the cord really ingredient to the story in such a a way that we should connect it to Christ? If a mental association based on scarlet is arbitrary, merely symbolic in itself, does that mean that we cannot read the text in a way the prefigures Christ? Or might it point us toward a deeper narrative connection, coherence that is more inherent within the story? In that case, we might consider how the divinely appointed object served as the sign and means of God's deliverance, typifying how God rescues people and brings them into promised blessing (pp. 50-51).

Tomorrow I will post Brevard Childs' thoughts on a multi-level reading of Scripture.
Posted by Phil Sumpter at 11:15

Forgive me if what follows is standard fare in this discussion, as I've not read much on this topic.

That said, I wonder if the question of figural interpretation might be less complicated if we didn't try to connect each instance directly to Christ, but instead to the theological complexes of the OT/HB (some of which, Christ is explicitly the fulfillment of in the NT). Looking to Rahab's scarlet cord, the final form of the opening chapters of Joshua seem to have already offered a figural/typological interpretation of the story in light of the exodus/sea event. Read in this light, the scarlet cord around a window might more readily connect to the blood of the paschal lamb rather than of Christ. I wonder if one wouldn't find the Christian significance of this story in its connection to that larger theme which is so overtly connected with Christ in the NT.

thanks for your helpful input and sorry for the late reply!

I totally agree with what you are saying. I think that a move from text to Christ certainly involves various stages of meaning, e.g. first one looks at the plain sense (what the story is telling us), then one keeps an eye out for "canonical pointers," which try to calibrate one event within a larger narrative with it's concerns, and then one sees what all this has to do with God in Jesus. The link you have seen with Exodus is a clear way of doing this, given the significance of Exodus motifs for the NT (as you note).

So yes, I think something like "Old Testament theology" needs to be a mediator between the meaning of the text and Christian claims concerning its "fulfilment."

By the way, I think I say something along these lines in my post A multiple level reading of Scripture.