Dealing with anachronism in Exod 16:1-36

Assuming one wishes to read the Old Testament as "Christian scripture," how does one deal with the presence of anachronism in the storyline? As part of my general overview of Childs' approach to Biblical exegesis, I turn today to Childs' treatment of the anachronism that is found in the story of the manna and quails (Exodus 16:1-36). 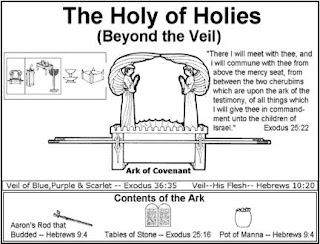 According to the story, God commands that the jar of manna be placed “before the Testimony” (i.e. tablets of the Ten Commandments; עדות; v. 34). The problem is that the Ark, which contains the Testimony, hasn't been built yet. Childs rejects both the pre-critical solution to this problem, which says that God's command was given by way of anticipation, as well as the typical historical-critical solution, which say it was simply an oversight on the part of the redactor. Childs interpretation is also not “post-critical,” in the sense that he does not attempt to bracket out the question of the history of the text and remain within the "story world" of Exodus. Rather, he notes that it is often the case that “chronological inconsistencies usually reflect definite theological concerns” on the part of the Biblical editors[1] and proceeds to deduce that intentionality from the effect created by its present placement. In light of this broader editorial activity, he concludes the following:
It is much more likely that also here there is a theological point which caused the writer to override the chronological sequence. A jar of manna which is the sign of God's sustaining mercy is kept alongside the tablets of the law. Indeed, the sign of divine grace preceded the giving of the law of Sinai! Still the emphasis of this passage does not fall on establishing the priority of the manna, nor should the chronology be pressed. Rather, the point of the text focuses on the testimony that the manna and the tablets belong together before God. In New Testament terminology, the gospel and the law cannot be separated.[2]
Note that Childs is happy to let the tension stand at the level of the narrative: there is a genuine anachronism. But this is only a problem to a modern reader, for whom chronological consistency is an overriding concern. When seen in the light of its diachronic development, Childs tries to get to the matter that was editor's concern, and that is theology. You could say God's time over against our time. The "divine economy" trumps "profane history," such that we catch a glimpse into the order of events that really matters: in salvation history, grace always precedes law.
Childs is also sensitive to the issue of over-weighting the editorial concern. In his opinion, the weight of the text does not consist in the fact that it is now placed before the giving of the Law. It still has a degree of independence over against its larger narrative context. The main point is "pericope immanent": gospel and law cannot be separated.
[1]     Childs, Exodus, 291.
[2]     Childs, Exodus, 291-292.
Posted by Phil Sumpter at 23:12