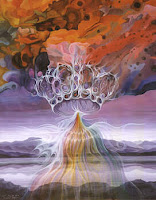 This post represents my summary of the logical content of an early Advent sermon on Psalm 24:7-10, preached by Eberhard Jüngel (in Predigten, 1965). I have my critiques. I think his overly existentialist inerpretation of the substance of Scripture biases his appropriation of the Psalm for his congregation. But feel free to give me your thoughts:
The text allocated to Jüngel to preach on is not the whole Psalm, rather it is only its third and final strophe. He thus takes its content as the starting point for the sermon. He is aware, however, of the Psalm as a literary unity and so brings in the first two strophes as they bear on the message of the third.
His logic seems to go through four stages, each dealing with the concept of “gates” and “God” alternately, moving in the following order: gate, God, gate, God.
Gate 1: He opens with thoughts on the nature of gates in general: they serve both to guarantee and to deny access to a place beyond them. In particular, when the world beyond the gate and the world in front of it clash, then the gate remains closed. It functions as a barrier and not an entrance.
In our text we also have two “worlds” that are about to meet each other, separated for now by a gate. Their identity is supplied by two types of “inter-textual” connections. No doubt drawing on key words in strophe 2 (hill of the Lord/holy place), as well as critical scholarship,1 Jüngel concludes that, in one sense, the world beyond the gate is the interior of the temple. He does, however, think that this designates the true referent of the text. Drawing on the logic of Biblical theology, he believes that the interior of the temple represents the created order. This is a nuance it gains when it is seen elsewhere in the Bible as the centre of the cosmos, a resonance that seems to be affirmed by the creation theology of strophe 1. In conclusion, the gate provides access to the world of humanity.
God 1: The identity of the person in front of the gate is provided by the immediate context of the strophe: it is “the Lord of hosts.” This immediate identification, however, does not immediately speak to Jüngel's “the clash of two worlds” scheme, so he turns to strophe 1, which identifies Yhwh as creator of the cosmos. As such, the one desiring entrance into the world is its own creator.
This creates an odd, “spectral,” scenario: the Lord wishes to enter a temple devoid of his presence, a Godless world. If he stays outside, the world will remain like a “spectre,” devoid of its true life. What ever metaphysical questions this dichotomy may raise, however, are ignored by the Psalm, whose focus is thoroughly theocentric. What matters is what is going on in front of the temple.
Strophe 3 depicts quite a fanfare, as a mighty warrior demands entrance. Jüngel relativises this, however, by reading it in the light of strophe 2. God isn't the only one desiring access, humanity desires this too. Their means of access is a moral lifestyle. Jüngel believes that the direct juxtaposition of the two strophes leads to the conclusion that the Lord's means of access parallels that of humanity (“Auf dem Weg der Menschen zum Heiligtum kommt Gott daher”). He too must wait outside, before the doors are opened from the inside. Jüngel even goes as far as to say that he submits himself to the rules of humanity, standing to justify himself at the door. In short, the fighter comes, but he doesn't fight.
Gate 2: Jüngel then attempts to “get to the heart of the matter.” He returns to his pontifications about the function of gates. Working on the assumption that it is the function of the gate that is the key to its true significance, Jüngel seeks out similar barriers or entrances that function as metaphorical gates. He concludes with the gate of the human heart, which is, in some sense, the “ultimate” gate (“Auch an diese Tür und an sie vor allem klopft der Adventspsalm”). In terms of relationships, we can open ourselves up and be transformed by someone else, or bar them from access. This is our decision. The gates of the temple, then, which are the gates to the created order, become the gates of our hearts. Jüngel even draws allegorical significance from the command that the gates be “lifted up”: “Wer sich Gott öffnet … der muß sich ihm ganz aufschließen.”
God 2: Having identified the true temple, Jüngel returns to the person desiring access. He is not only the Creator of the Universe who has come along the path of his own creation, he is a mighty warrior, the Lord of Hosts. Jüngel draws two conclusions from this, one for each appellation. Interpreted in the light of an anthropomorphised temple, Jüngel considers the paradox that this warrior does not fight his way into our lives. He waits for us to accept him. If this is done, he can be a warrior for us rather than against us. Finally, this warrior leads not an earthly army, but a heavenly host. Granting access into our lives of this heavenly leader permits us to participate in his divine life.
Given that Jüngel's theological hermeneutic requires the exegete/preacher to so interpret the text that he is "left alone with it," what do you think? Is this a faithful exposition?
Posted by Phil Sumpter at 18:55

If you want your ex-girlfriend or ex-boyfriend to come crawling back to you on their knees (no matter why you broke up) you need to watch this video
right away...