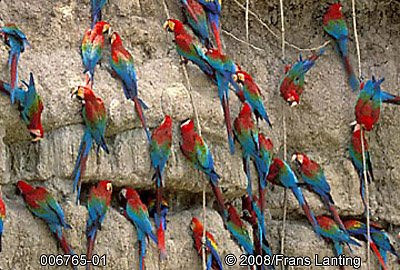 I seem to be able to pick up the implications of canonical exegesis everywhere I look. One of the best places for inspiration is Phaidon's The Photo Book (for other photographic Anstöße go here). The comment on the photo above reveals an interesting insight into the beneficial function of nature photography as a remedy for the human drive to objectify and possess. I think Childs' canonical approach to Scripture has a similar function within the field of biblical scholarship:

Photography, of the kind practised to perfection by Lanting, both represents and realizes nature's objects in a way which answers to and deflects our need to possess. Thus, having seen these wary birds eating their way through a drying river bank, it will be hard to imagine them as having an independent existence away from their habitat. Lanting's idea, as stated in National Geographic, where his work often appears, is: 'To turn wild creatures into ambassadors for whole ecosystems.'

I like this idea of nature photography answering to and deflecting our needs. In a similar way, when we read the Bible, we notice its foreignness and particularity. We have a need to grasp this, to make it our own by philolgical, literary, and historical analysis. This is OK; it's part of the text. But when we start grappling with this dimension, we see that the text ultimately points away from itself. The particularity of each pericope wants to draw our attention to a larger, unified reality which undergirds the whole.

This is the function of canon. No one text stands on its own, but rather dialogues with other texts in an attempt to give voice to their common source. When we catch a vision of the theological whole - the ontological unity of Scripture - it's hard to imagine each pericope (or redactional strand, or source, or gloss etc.) having an independent existence away from their literary habitat. Each work of canonical interpretation functions as an ambassdor, reminding us that the true ecosystem of the part is the canonical whole.
Posted by Phil Sumpter at 16:45