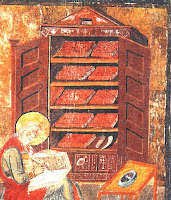 According to the Masorah of Psalm 24: 3, the phrase בְהַר־יְהוָה occurs three times in the Bible: in our verse here and in Genesis 22:14 and Isaiah 30: 29. No matter how I type this phrase into my Logos word search, however (i.e. with or without vowels and accents), I only get two results: Ps 24: 3 and Isaiah 30: 29.

How is that possible? The only difference between Ge 22:14 and the other verses (apart from the accents) is that it doesn't have a maqqef. If I speed search the highlighted text in Gen 22: 14, I only get one hit.

Am I doing something wrong or were the Masoretes really inspired?

As I've written on the side bar of this blog, I'm a technological numpty. I've figured out the problem. Gen 22:14 does turn up in the morphological search, as long as all the settings are right! Nevertheless, I thought it would be interesting to post the differences between Logos and the Masorah in the rest of Psalm 24. All the references, in fact, are completely accurate appart from two:

I'm moved Stephen. Thank you. By the way, I updated the post.

Glad the Masoretes have again proven themselves to be correct. I was a bit concerned there for a bit.

I'm not sure if you read the updated post; I wasn't using my Logos properly!

The MT was almost totally correct and there are two spaces where it would seem that Logos was better ...

I'd be interested to know if the Masorah are useful for you in your literary approach.