What makes a commentary "excellent"? 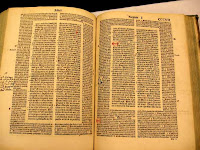 The following thoughts are taken from Childs, "The Genre of the Biblical Commentary as Problem and Challenge," in Tehillah le-Moshe, 185-192; here, 192:

In the preface to his Romans commentary, John Calvin offered two criteria by which to judge excellence in biblical interpretation, namely, lucid brevity. Perhaps it would be helpful after 400 years to expand his list in the form of a series of questions.

I would add: has the commentator soaked himself within the dogmatic tradition of the church in order to enable the text to become a transparency to its true theological subject matter, a reality which explodes the literal sense of the text.

This is my own formulation, but I got the general idea from reading a lot of Childs. I wonder why it wasn’t included this quote? It was published in ‘97. Perhaps his move towards allegory wasn’t in full gear yet.

I’ve yet to listen to the Jenson lecutures to see what he would say on this.
Posted by Phil Sumpter at 19:00

I have found that most bloggers think a commentary is excellent if the get it for free! ;-)

In a commentary, I am after depth and breadth. I want a host of methodologies employed - diachronic analyses (source, form, redaction criticism, tradition history) and synchronic analyses (narrative criticism, new literary criticism). I also do want evidence that the commentator has thought deeply about the issues.

One method of judging that I sometimes use, and that is terribly presumptuous and unfair of me, is to flip to the commentary's treatment of a given text I am familiar with or on which I have worked, and see what they do with it. If I am pleased with it, it gets bonus points (and that does not mean they have to agree with me . . . )

especially if they got it for review for free!

I'm with you on that, John. One thing I find interesting is the application section, i.e. building the bridge to the present. I've still not found anything convincing in this area, though the SCM Theological Commentary series looks promising. I'll be perusing Radner's commentary on Leviticus soon (I like Brueggemann's comment: "This series places the accent on 'theological' and reflects current interpretive ferment marked by growing resistance to the historical-critical project. It may be that scripture interpretation is too important to be left to the exegetes, and so a return to the theologians.")