Description of the Canonical Shaping of the Pentateuch 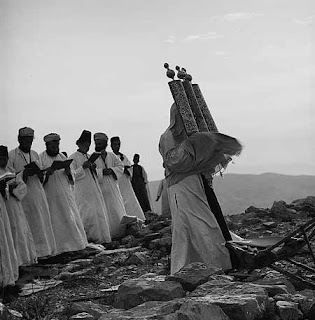 According to Jewish tradition, the five books of the Pentateuch constitute a unity, designated as the "Torah", the "Torah of Moses", or the "Book of the Law of Moses". The tradition is ancient, assumed already in the Septuagint and all the Hebrew manuscripts.

Childs* asks whether this five-fold division actually belongs to the canonical tradition of the Old Testament itself or whether it was a post-Old Testament development. He looks to the redactional evidence.
First, it is quite clear that the five books were seen as separate entities by the final Biblical editor in spite of the continuity of the one story (Creation-Death of Moses). For example, though Exodus continues where Genesis left off, at the outset it recapitulates material from Genesis (Gen. 48.8ff) in order to form an introduction to the new book. There is similar evidence amongst the other books of both continuity of the story and integrity of each book.
In sum, there is clear editorial evidence to establish five divisions within the material
Childs goes to to ask whether there is editorial evidence to show a relationship in terms of content, beyond the formal aspect. It is clear that the three middle books share the same basic content, which has to do with the giving and receiving of the law by Moses at Sinai. This history at Sinai is given coherence by means of an explicit chronological sequence, and the event is both preceded and succeeded by accounts of the wanderings to Sinai and from Sinai. Though Genesis differs greatly in style and content to this central block (it speaks of a family, not a nation), the material is integrally connected with what follows in that it speaks of the promise of a posterity and a land. As such, Genesis was seen by the final redactor as the introduction to the story of Israel which began in Exodus. The final book in the collection, Deuteronomy, is also distinct in style (e.g. it is paranetic). Whatever its original role in the development of Israel's history, the editor understood Deuteronomy's role as a type of commentary to the preceding laws. In its new setting and period, Moses is emphasised as mediator and interpreter of the divine will. It is therefore in order that the Pentateuch closes with his death.
To summarize, the content of the five books evidences an intentional structuring of these books into a purposeful theological whole.
The full force of the concept of a 'Pentateuch' is emphasized when one realizes that the shape of this redaction is neither the natural nor the original historical order. Rather, the original tradition extended into the book of Joshua, forming a Hexateuch. The editors, however, decided that Deuteronomy should conclude the first part of the sacred tradition as the place where God made his will known to Israel. The stories which continue with Joshua are qualitatively distinguished from the Pentateuch in that the revelation of the will of God (Torah) is assumed to be known in Israel (Josh. 1.8).
Again, to summarize,

"the recognition of the Pentateuch as a special body of sacred tradition which constituted a whole is already testified to within the Old Testament itself. It needed only later tradition to formulate the terminology for a reality which it had received." (p. 717)