Creatio and conservatio in Ps 24:2? Hossfeld's grammatical and Biblical arguments. 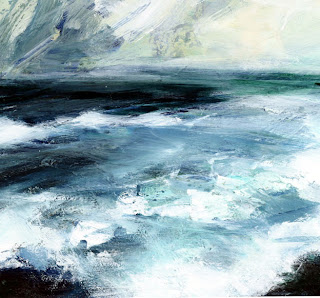 Update: Chris Tilling has been doing some thinking in a related area. In this post he struggles with the "Biblicality" of the concept of creatio ex nihilo, and in this post he shares some thoughts on creation, chaos, and nothingness by Bauckham.
Posted by Phil Sumpter at 15:01

Where did the art work come from, I love it!

Ps 93:1a is rendered by almost all Bible translations as 'the LORD is reigning or something similar. J. B. Rotherham, however, put it "yahweh hath become king, whereas Young and Douay-Rheim render it hath reigned.

Why the differences? I suspect it has to do with the perfect/imperfect tenses, and perhaps the waw consecutive rules, but I don't know how they all fit together. Do you?

Whether you do or not, thanks for entertaining the thought, which is afield from your post.

Hi Tom (if I may use the shortened version of your name),

sorry for the late reply, I've been away for a week. I'm sure all the elements you have mentioned apply, as well as syntax and form critical considerations. Due to the wonders of Logos Bible Software, I will simply post Tate's comments from his Word Biblical Commentary (p. 472):
1.b. The expression יהוה מלך has received much attention, especially since S. Mowinckel’s proposal in 1921 to translate it as a cultic affirmation in the celebration of Yahweh’s kingship, with the meaning “Yahweh has become king” (Psalmenstudien, II, 6–8). The expression occurs elsewhere in 96:10; 1 Chr 16:31; Pss 97:1; 99:1. The most significant critique of Mowinckel’s proposal was made by D. Michel, “Studien zu den sogenannten Thronbesteigungspsalmen,” VT 6 (1956) 40–68; also his Tempora und Satzstellung, 215–21; also see H.-J. Kraus, Psalms 1–59, 86–89; and brief treatments with references to the literature in K. A. Kitchen, Ancient Orient and Old Testament (London: Tyndale Press, 1966), 102–6; D. M. Howard, Structure, 39–40. Since the work of Michel, most scholars have translated the expression as “Yahweh reigns” (Michel: “Yahweh, is the one who exercises kingship”) or “Yahweh is king.” Howard (40) notes that no major English Bible version has adopted Mowinckel’s “Yahweh has become king!” The major argument against the formulaic expression “x has become king” is based on 2 Sam 15:10 and 2 Kgs 9:13, where the exclamation “x has become king” is clearly indicated, but where the word order is “x מלך” (see also Isa 52:7). The argument is supposed to be strengthened by 1 Kgs 1:18, where the word order is מלך XXX, but which is commonly read as “x is king” or “x reigns as king” (note the “x מלך in 1 Kgs 1:11, 13).
The argument from 1 Kgs 1:11, 18 does not seem very strong to me. The context is that of Adonijah’s attempt to seize the kingship in view of the impending death of David. The durative aspects of Adonijah’s kingship could hardly be the major subject of Nathan (v 11) and Bathsheba (v 18). They are concerned with the fact that Adonijah has seized power and become king.The context of Ps 47:9 [8] may favor the translation “God has become king” rather than “God is king.”
The placement of subject and verb does not provide very persuasive evidence against the idea of beginning a reign. “The placing of the subject first simply gives added emphasis to it” (J. Day, God’s Conflict with the Dragon and the Sea, 36). In his later work, Mowinckel still defended the meaning of “Yahweh has become king” (PIW, II, 222), but he recognized that the argument for a shout of homage does not depend on the translation: “It is of secondary importance whether we translate ‘reigns as king,’ for in every case the attention is turned toward the ‘ingressive’ element.” He asks why the MT did not vocalize as מֶלֶךְ if the idea of a durative state of being king was intended. Mowinckel (PIW, II, 223) is surely justified in arguing that the treatment of יהוה מלך as a cry of homage in the sense that “Yahweh has become king,” or “Yahweh reigns (anew)” does not destroy the idea that Yahweh always is king. Cultic terminology should not be pushed into such rationalistic modes of thinking. The dramatic nature of worship does not require an exact metaphysical delineation of words in liturgies. Note Rev 11:17, cf. v 15; 19:6 which follow the LXX ;texts. I have adopted “Yahweh reigns” for the Translation, but in an acclamatory sense which celebrates the repeatedly new enthronement of Yahweh.