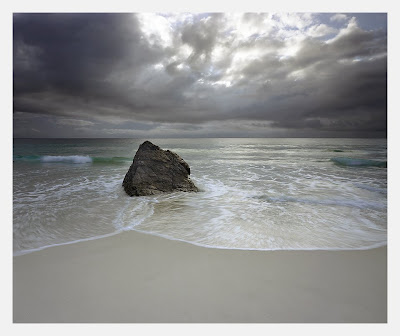 Two Psalms experts have kindly weighed in on my attempt to use Niccacci's theory of the verbal system in Hebrew poetry to translate Ps 24:2: John Hobbins and Pete Bekins (read their helpful comments in the comments section). John and I are agreed that the shift from qatal to yiqtol represents a shift in temporal perspective - somehow (Pete begs to differ, on diachronic grounds). However, neither John nor Pete like my translation using the "-ing form" :

Though John can appreciate my attempt to get at the "dynamism" of the yiqtol behind the verb "establishing," he worries that it creates the impression that this colon is subservient to the former, creating the impression that it is portraying a shift "from main-line to secondary-line information."

But I don't get why this is wrong. According to Niccacci, secondary-line information (x-yiqtol/weqatal) can function in various ways to specify what is happening in the main line (qatal/wayyiqtol). How it specifies what happens is open to context, but if John is right that the second colon somehow intensifies the meaning of the first colon (as is typical in parallelism, cf. R. Alter), then does that make it in some sense parasitic on the first colon? Doesn't that mean that the second colon is somehow subservient to the former? I've tried to improve on my translation by adding the word "indeed," thus:

for he has founded it upon the seas,
indeed, establishing it upon currents.

The solution isn't perfect because the -ing form still sounds like a relative participle, qualifying the manner in which the first action happened. But I fined the present simple (establishes) just sounds unnatural and doesn't achieve what it's supposed to do! Niccacci offered a similar solution to mine for two similar cases: Ps 78:20 and 25:

(v. 58) And they provoked him to anger with their high places,

indeed, <they> were constantly moving him to jealousy with their idols.

Here we have the same event described twice, the second being "more intense." However we understand the exact temporal dimension of the verb (I chose the "-ing form" instead of the past continuous because "was establishing" means either that God was either establishing the earth again and again or that the action has been reduced to an unnaturally slow place, as if in "slow motion"), the second yiqtol colon is subservient to the first clause by making it come more alive -- somehow.

p.s. For some really awesome photos of rocks and sea, go here. I posted this one so large because it, well, rocked!

Here is my thought...

Recurrence is a frame for meaning.
The second line is not subservient
but its redundancy locks in the meaning of the first line.

Others may well have put this in words before.

Recurrence may be distant in the poem.
From far away an echo will close a bracket
and circles will surround the core.

Nowhere is the circle more obvious than in Psalm 51 with its cell structure locking in the righteousness of God at the centre of each. It seems to me that tense and verb form remain subservient to the meaning of the frame - but they sometime make the form in themselves. I suspect that Ancient Hebrew would mean next to nothing to us without the repetitions that signal its forms.

My thoughts here come from systems theory rather than scholarly reading, the structure of software rather than the discipline you are in the midst of.

Since here you have three cases of a change in verb form within a small frame, perhaps it is very important not to consider that the first is distant in time and the second simply repeating that distance, but that the second is correcting the impression of distance by making creation present.

I read Psalm 78:20 as sarcasm - imitating verses 15-16 - thus the wrath of verse 21. The frame is larger than the verbal relationships in it - and this poem is much closer to narrative than psalm 24.

verse 58 does not itself have a tense switch in the miniature frame - both are hiphil imperfect.

Back to psalm 24 - I think the present reality of creation is important - so the switch to the present tense in English can help us not place creation in the distant past. I admit this is a theological reason.

Anyway - I hope this gives you a studied opinion as grist for your mill - as always I am very interested in where this conversation might go - so thanks again for sharing your puzzles.

Psalm 78 is a great conversation piece for all sides in the TAM (tense-aspect-mood) wars. It is a like the rock in the jpeg at the top of the post. Everyone's ship, when it runs against it, is shattered into pieces.

John's comment is a pleasure to read - and I have thought a few times in my almost three years of daily study of this language (after the manner Suzuki violin pedagogy), that anything goes when translating verbs! I have like a young violinist tried to play harmonics and fifth position before my muscles and coordination are ready - but I know these sounds are possible and I would just hear them even if I did not know quite how to sing the part (for I am not a violinist but a singer as I am not a native Hebrew speaker, but English).

Thanks again John for the recognition of the rock and the everflowing water from it on which the world is established.

BTW, I'm clear that a translation with historical presents in English for, ex hypothesi, yiqtols in that sense, is sometimes awkward. We tense-switch too, but not really like poets did in ancient Hebrew. No do we do enallage like they did.

So, it's going to be necessary, in a translation that prioritizes adherence to vernacular English, to level the differences. Understood.

its redundancy locks in the meaning of the first lineCould you clarify what you mean here?

verse 58 does not itself have a tense switch in the miniature frame - both are hiphil imperfectNiccacci places great emphasis on the difference between wayyiqtol and yiqtol forms. You have to see this in the context of his broader theory of syntax.

Back to psalm 24 - I think the present reality of creation is important - so the switch to the present tense in English can help us not place creation in the distant past.But the verse isn't about creation per se, nor is it saying that God is constantly establishing it. It is saying that his current status as ruler derives from a past, one-off action: bringing into being a world of stability. That's theological too.

I'm out of my depth here, but the hard swimming is good exercise for me :) !

I didn't know that Ps 78 was such a case study. That's a good fact to bear in mind.

I'm aware of the tense/aspect contrast, but I've not yet read of the "mood" contrast (van der Merwe doesn't mention it).

For me, modality is something quite special ... At least in English, it expresses the "subjective interpretation of the non-factual, non-temporal elements in an action." That's why "would" used for the past often carries tinges of nostalgia etc. (in Lewis's terms, it expresses the psychological distance of an event). Your modal interpretation below ("would defy") fits this, as its colon is - on Niccacci's terms - expressing second-line information, illustrating or giving extra information to pad out the "story-starting" wayyiqtol in v. 39. So once again, I find myself agreeing with you. Where exactly do you not agree with Niccacci? You both see the shift in tense as semantically significant (contra diachronic analysis, which you only list as your less preferred option), and on your description of the sequence of events also seems to go along with Niccacci's description of main-line, second-line hierarchy. The only difference is that according to Niccacci's syntax, the [x]-qatal in v. 41 also gives background information, like an [x]-yiqtol. I'm not sure how he would translate "vexed" and I'm also not acquainted with your phrase "zero contrast."

Concerning your translation for vv. 46ff, I have to say, though I like what you are trying to achieve with your "historical present," I just don't think it works as a translation. To suddenly shift to the present simple like that is unnatural (isn't it?). As far as I understand, the historical present is used to tell a "history" (story), which means it is part of a chain of events (e.g. "it was really dark outside, right, and then he goes round the corner and this thug jumps out from behind a bush ... "). I'm not sure you can just suddenly switch between past and present simple and still keep that effect. An -ing form of some description would seem to be preferable ... (as I wrote here). (Update: I just read your second comment. Glad that we agree again).

My last question (for now!), why do you not prefer the diachronic solution?

Phil - I am out of my depth too - but that's all the more reason to keep on swimming!

"Locking in the meaning" is probably too strong a phrase. One repetition does not lock in meaning. Recurrence patterns over a large number of instances helps.

Getting used to the 'foreign' way of thinking helps us to see and think differently from our presuppositions. This is part of the blessing of Babel.