If the Messiah came, why do evil and death remain? 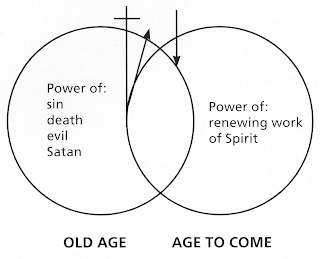 That's a question Paul was forced to asked, being steeped in the Rabbinic theology of his day. Here is his answer, according to Bartholomew and Goheen (see also my two other posts: Disappointment with Jesus (I) and Why is Jesus taking so long? (II).):

But if the old has passed away [the 'olam hazeh in the crucifixion] and the new has come [the 'olam haba', in the resurrection], why do evil and death remain in the world? Paul’s letters are charged with the same tension between the “already” and “not yet” aspects of the kingdom of God that we have seen in Jesus’ own teachings, but with some differences in emphasis. For Paul, the kingdom is here already in that Jesus’ death brings an end to the old and his resurrectioinaugurates the new. The Spirit is described as a deposit (or down payment) on the coming kingdom (2 Corinthians 1:22; 5:5; Ephesians 1:14). A deposit is not merely an IOU or promise for the future; instead, it is a real payment given now as a guarantee that in the future the rest will be paid. The Spirit is also pictured as firstfruits, the first part of the harvest, ready to be enjoyed now, and tangible evidence that the remainder of the harvest will also come (Romans 8:23).

The kingdom has not yet arrived for us in its fullness. We remain in a world that has not yet been fully delivered from the influence of evil, demonic power (2 Corinthians 4:4). We are still surrounded by the darkness of sin and rebellion against God (Ephesians 2:2–3), even while we anticipate the full revelation of God’s kingdom in which those things shall be no more. Thus, in Paul’s thought there is no clearly marked threshold between “the present age” and “the age to come.” We live in the “in-between” time, in which the two ages overlap. Paul goes on to explain that these two ages are allowed to coexist within God’s plan so that the church’s work of mission—the gathering of the nations to the God of Israel—can be accomplished before the final revelation of the kingdom. In fact, God gives this in-between time to the church as its own, to fulfill its calling as his witness to the coming of the kingdom.[*]

God is not omnipotent. He is not all-powerful, it's like yin-yang, don't you think? It's obvious that satan is a very strong opponent who tends to win about half of the battles against God. But that's o.k. because God is trying as hard as God can to help us and as long as God is trying to help as much as possible I can still love that kind of God even is no gaurantee of being saved or victorious.

Wordspeaker takes a path well-trod. Already in early Christianity, there were strands which turned away from the God who creates and saves and finds solace in a hidden God.

The gospel of Thomas is a not-too-fanciful example. But such an approach has to leave a lot out. It is far less all-encompassing than Paul's understanding, for example.

like John Hobbins, I use the New and Old Testaments as my context for answering these questions. They function as my "rule of truth."

This is a truly important dimension in reading the NT and a useful diagram. I think, however, that the diagram would be even more accurate in reflecting how the NT understands the significance of what God has done and is doing through Jesus if the inaugurated breaking in of the Age to Come begins at Jesus' baptism and not at Golgotha and the empty tomb. Space prohibits pointing out why this is a better way of representing what the NT is doing. A small tweak of your diagram would signal this dimension of NT Theology even more faithfully IMHO.

Hi Terry, sorry for the late reply. Thanks for your comment, something worth thinking about, though it's a pity you can't go into more detail (feel free to change your mind!). I have to say, I find it hard to see how Jesus' baptism represents the decisive victory over evil and thus the inauguration of the New Age. He was tempted by the Devil directly afterward!