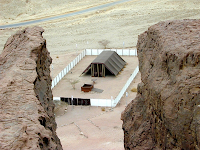 A great quote:
"Exodus concludes with God’s coming to his tabernacle to dwell there (40:34–38). God’s occasional appearances to Israel have now yielded to his permanent presence in their midst. And the tabernacle moves with them wherever they go; God journeys with his people. But the tabernacle suggests much more than this: it is an emblem of the full restoration of God’s presence within the whole of his creation, just as he originally intended:

At this small, lonely place in the midst of the chaos of the wilderness, a new creation comes into being. In the midst of disorder there is order. The tabernacle is the world order as God intended writ small in Israel. The priests of the sanctuary going about their appointed courses is like everything in creation performing its liturgical service—the sun, the trees, human beings. The people of Israel carefully encamped around the tabernacle in their midst constitutes the beginnings of God’s bringing creation back to what it was originally intended to be. The tabernacle is a realization of God’s created order in history; both reflect the glory of God in their midst.

Moreover, this microcosm of creation is the beginning of a macrocosmic effort on God’s part. In and through this people, God is on the move to a new creation for all. God’s presence in the tabernacle is a statement about God’s intended presence in the entire world. The glory manifest there is to stream out into the larger world. The shining of Moses’ face in the wake of the experience of the divine glory … is to become characteristic of Israel as a whole, a radiating out into the larger world of those glorious effects of God’s dwelling among Israel. As a kingdom of priests, … they have a role of mediating this glory to the entire cosmos." [*] [**]

Email ThisBlogThis!Share to TwitterShare to FacebookShare to Pinterest
Labels: Cult, Liturgy, Quote of the day

Great quote and welcome back.

Thank you Terry. I won't be posting as often as before but I don't want to give up altogether.

If you want your ex-girlfriend or ex-boyfriend to come crawling back to you on their knees (even if they're dating somebody else now) you must watch this video
right away...