The Text as Tradent of Authority

For an overview of posts in this thread, go here. 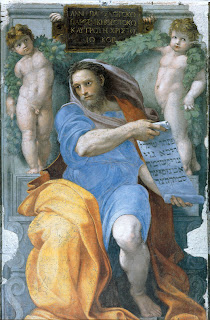 "Prophetic authority is related to the function of the biblical text. The text is the tradent of authority in establishing a link with specific prophetic figures. The literature has no life apart from Israel's life, institutions, and offices. The prophet serves as the living voice of God now preserved in a living text of Scripture. The text can certainly be extended beyond the scope of the original prophecy, but the theological link with its origin must be maintained in order to sustain its authority. It is impossible to have free-floating literary constructs which are totally without historical rootage because authority ultimately rests on divine communication through these prophetic messengers. The prophetic text is not a creation of nameless editors to manipulate for a private agenda, but it remains the irreplaceable vehicle in the service of God for the sake of Israel.
There are different functions of textual authority which directly relate to the issue of the retrospective reading of the prophets. One such role provides the proper theological explanation for the function of etiology with the biblical prophecy. The technique of historical retrojection is not an attempt, as often claimed, to buttress a failing prophetic authority, but rather a means of confirming its recognized truth. Events in history were retrojected into the past precisely to confirm the authority of the prophetic voice. Thus, most likely the savage imagery of the utter destruction of Jerusalem in 587 was used post-factum in Isa. 6:11ff. to register the truth of the prophetic threat which the editors viewed as a unified reality according to its substance which unfolded in history as predicted. Similarly, Isa. 22:8b-11 appears to be a retrojection of the destruction of the city which functions as the voice of the prophet who outlined the plan of God which was never heeded by Israel either in the 8th or 6th century.
Then again, the role of the biblical text as tradent of prophetic authority explains the important feature of intertextuality common to the prophetic corpus. A prophetic text is specific and concrete, yet its imagery continues to reverberate within the tradition. It continues to exert a coercion on future generations of recipients and gives evidence of its force in the way in which a text is repeatedly actualized to remain highly existential even in changing historical contexts. This echoing effect arises from a widespread conviction that the authority of a single text extends to the larger story and partakes of the selfsame reality. By means of intertextuality a text can be extended into the future by means of Fortschreibung or it can be retrojected into the past by expanding and enriching the earlier imagery from the content of later events. Both redactional movements employing intertextuality rest on the same inner logic of Scripture's textual authority."
B.S. Childs, "Retrospective Reading of the Old Testament Prophets" (1996: 375, 6) ZAW 108 362-77.
Posted by Phil Sumpter at 14:54

Please pardon my vocabulary limitation as i can't find the word 'tradent' in any dictionary available to me.

Could you tell me what does the word means?

Just a note, I notice Richard Bauckham using this word in his book too. But I have no idea what it means.

I recently published an article on Childs. The editor asked me whether I wanted to use the term "tradent," as he felt it was outdated. I insistend that it is an integral category in Childs' canonical approach. That is because for Childs the community always plays a central role in discussions about the nature of scripture.

A tradent is a person or thing that passes something on. It's from the word "tradition," i.e. that which is passed on (Latin: traditio). Israel are the tradents of the tradition, i.e. through the people of Israel God's revelation is preserved and passed on. In this context the text is not in and of itself authoritative (in the way the Quran is for Muslims). Its authority is derivative of the authority of the historical prophets and its function is to preserve and pass on (in German tradieren)their message.

In what sense does Bauckham use it?

Thank you very much. That explains a lot.

I was actually a little frustrated for not able to fully understand and appreciate what Bauckham was writing because of my ignorant of the word.

He uses it in the way you described. For eg. on page 285 of "Jesus and the Eyewitnesses", Bauckham uses it in this way:

"Only when formulated and transmitted by the eyewitnesses and especially, though not exclusively, by the Twelve after that resurrection of Jesus would the narrative traditions about Jesus have become more formal, in the sense of tradition authorized by an acknowledged competent tradent and formally delivered to others."

A side note: I've always been impressed by Child's canonical approach but still do not have the luxury to explore him in depth. Thus only once in a while, when circumstances allow, I'm able to read a bit here and there about him and his approach from your blog and others.

Interesting quote from Bauckham. I need to get into him at some point. On the interface between Bauckham's approach and the canonical approach, you may want to check out this fascinating article: http://narrativeandontology.blogspot.com/2008/01/eyewitness-vs-written-testimony-some.html.

Feel free to ask questions whenever you want. I'm not a professional, but have read more of Childs than your average doctroal student!