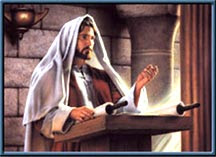 Here's what Hermann Diem has to say, taken from my notes on his excellent Dogmatics (the continuity with Childs' canonical approach should be clear!):

Jesus grew up in the Jewish faith in the tradition of Sinai, and recognised its validity by His attitude. In arguments with pharisees, Jesus does not reject the paradosis [Greek for tradition] as such, but applies to it a critical norm as follows: (155)

“where the Law as the content of the paradosis is no longer understood to be the present concrete requirement of God, demanding the self-surrender of man, but rather serves as a form of human righteousness which can be manipulated by man himself in the interests of his own self-justification, then the law in question is to be rejected.” (155)

“opposes the tendency to establish the Law as an absolute by putting forward the point of view that the Law exists for the sake of man and not man for the sake of the Law. By this means He refers us back from the Law to the Lawgiver, and thus changes as radically as possible the meaning of the Law itself by restoring its original connexion with the divine Covenant. The Rabbis have forgotten the consolation and the promise of the law and no longer envisage the Scriptures as a whole, as the Book of the Covenant, the document which bears witness to the Covenant grace of God.” (157)

Thus we see His connexion with the Rabbinic tradition of teaching and at the same time the source of His conflict with it. He does not violate the authority of the Scribes and Pharisees ... (Mt. 23:2f), just as much as no iota of the Law will be allowed to perish until all things be accomplished (Mt. 5:18).
For a related post, see my Jewish and Christian appropriation of the Law of Moses
Posted by Phil Sumpter at 10:48