Reading Neusner (or at least wanting to) 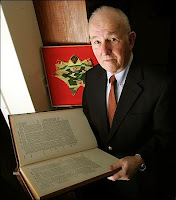 Kevin Edgecomb of Biblicalia , in response to my claim to want to read everything by Neusner, has kindly shared some of his wisdom on how best to approach this prolific scholar. I thought the information would be of general interest so I'm posting them here, along with my response (in which, as always, I manage to work in a reference to Childs).

Kevin:
I'd recommend starting with his Introduction to Rabbinic Literature, which is part of the Anchor Bible Reference Library (or, now, the Anchor Yale Bible Reference Library). But I would also have to recommend the book I've been going through, The Theology of the Oral Torah: Revealing the Justice of God. I think it would be a very helpful thing to read in order to experience a kind of selective immersion into the literature guided by someone so very familiar with it. For information on structure, dates, and so on of the Rabbinic literature, you simply have to have Guenter Stemberger's Introduction to the Talmud and Midrash (the English translation by Markus Bockmuehl is slightly updated since Stemberger's last German edition, as I recall).

Christian scholars simply don't get the in-depth exposure to the Rabbinic literature that they should have. Just look at the various ways so many (ab)use the word midrash as an example. Christian interaction with the Rabbinic literature, the documents of the Oral Torah, seems always to have been according to a Christian agenda, disallowing the documents to speak for themselves, often at best serving as simply a mine for interesting tidbits stripped of context, used in Christian historical or exegetical programs. The Oral Torah must be understood on its own terms, root and branch, and only then can a fruitful comparison begin to be attempted. This is a project only now in its beginnings.
Me
you are a legend. Thank you so much! I agree with you on the issue of midrash. Brevard Childs (the hero of this blog) shared a flat with him for a while when they were both students and I think Neusner had a big impact on him, even though they were to later challenge each other on the significance of "canon." Childs has often critiqued the way that midrash has been indiscriminately used in Old Testament studies (esp. in his articles "Midrash in the OT" and "Retrospective reading of OT prophets").
Update: Jacob Neusner has contacted me and kindly given me the following advice:

If you want to know the books of mine that I most value, I would say JUDAISM: THE EVIDENCE OF THE MISHNAH, THE TRANSFORMATION OF JIUDAISM: FROM PHILOSOPHY TO RELIGION; and THEOLOGY OF THE ORAL TORAH. These cover my work in literature, history, and theology.

You are indeed ambitious and must be commended for your goals. I do not mean to diminish your program by relating to you the following anecdote, merely to highlight that reading a book is not the same as studying it.

In 1970 candidate for NYC mayor Norman Mailer spoke at Yeshiva University. During the question and answer session, as I recall, he tried hard to impress us students by saying that he is engaged in "reading" the Talmud. He keeps it at his bedside and "reads" some every night. Needless to say, we students who pored over the Talmud six hours a day, were not impressed.

That said, please do not be deterred from your reading program, which impresses me much more than politician Mailer's did.

Have you considered reading the works selectively in order of publication? That would give you more insight into the development of Neusner's methods and their increasing sophistication and complexity as he worked his way through the canon of all the rabbinic writings.

It was the pure and persistent focus on the rabbinic canon that formed Jack's agenda. Questions from NT study or comparative religions periodically in-formed his work.

I'd never heard of the man until I read this, now I am planning on ordering the books Kevin recommended on ILL.

I'm not a legend, Phil, though I thank you for the compliment!

thanks for anecdote. Mailer sounds a bit tactless. I know that I'll never reach the level of a talmudic student ... simply being 28 and not having read it yet sets me back by, I don't know, 14 years? I think reading a scholar chronologically is very helpful, though not necessarily the best way. My experience of read Childs is that key concepts in his final publications threw his earlier work in a new light and helped me see where he was leaning. Either way, I have no concrete plan to start just yet. I have doctorate to write and there's enough on that subject to last the next two years! I think I would take the Candy Man's advice and start with the Mishna. I won't, of course, really undrestand it, but the full immersion experience will help me intuitively evluate its various interpretations. That's the theory, anyway!

wow, I'm glad to have introduced you to an important scholar. Happy reading.

whether you are a lengend or not in the real world, in the world of this blog you have the status of "legend." And seeing as I am the creator of this world, I can decree such things :)

Oh, alright then, if you insist.

How about a post of good things to start with in Bard Childs' books and articles? That'd be fun!

I keep planning to write something like that, but I struggle to find the time. You should get into him though - he was influenced by Andrew Louth, who I know you are a fan of. In his later works he focussed strongly on the Christian exegetical tradition with its use of allegory, especially in his fascinating The Struggle to Read Isaiah as Christian Scripture.

Here's something I wrote off the top of my head in response to a similar request for a reading list:

"I'm delighted that you want to discover one of the most brilliant Biblical scholars of the last couple centuries (I mean that). I think understanding Childs is hard work, as evidenced by his constant misprepresentation in the secondary literature. He's a global thinker and tries to leave no ground uncovered, so I think it would be good to get a smattering of bits of all his work. That would help you get a grasp of the parts. Here's a suggested list, in order of how to read it(italics=book, "quote"=article; you can get an exhaustive bibliography here:

Round this off with his two commentaries, which frame his entire career, with an eye for the continuities between them: Exodus and Isaiah.

And finally, the best explanation and defence of Childs is by Seitz, in the SHS book "Canon and biblical interpretation" called, I think, "The canonical approach and theological interpretation."All this is off the top of my head.

If you haven't much time, stick to his Biblical Theology of the O and N Testaments and his essay "Retrospective Reading of OT Prophets.""

Thanks, Phil! I'll look those up right away! I have Introduction to the Old Testament as Scripture, which I read some time ago, and I've read some articles of his (without remembering the names, though) so it'll be nice to have the rest.

I hope you can find the time to do a bibliography of his with commentary, something more substantial than an annotated bibliography. Perhaps make it a series, and just do them one by one? It seems you're the only regular blogger with a deep familiarity and great appreciation of his work, so it's up to you!

You can get an exhaustive bibliogrphay with tips for online material on Daniel Driver's blog.

As for an annotated bibliogrpahy, I've actually just reached the end of the first part of my doctorate, i.e. the theoretical analysis of Childs. I'm now starting my actual exegesis, i.e. a canonical interpretation of Psalm 24. As such, I can't really justify spending even more time on Childs. I need to get down to "hard tacks," as my prof put it. I think my most extensive treatment of Childs is my article in the Princeton Theological Review (downloadable here. I've been feeding it in drips and drabs into my ongoing thread on Theological Exegesis.

Thanks much, Phil. There's no need to rush. I very much appreciate the pointers, though. Happy dissertating!