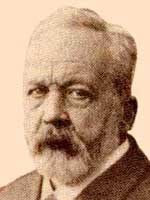 In his own words:

I became a theologian because the scientific treatment of the Bible interested me; only gradually did I come to understand that a professor of theology also has the practical task of preparing the students for service in the Protestant Church, and that I am not adequate to this practical task, but that instead despite all caution on my own part I make my hearers unfit for their office. Since then my theological professorship has been weighing heavily on my conscience.

For details (this quote is taken from a James Kugel speech), see Menahem Mendel.

I wonder if this has anything to do with the following quote from that genius, Paul Minear:

it is increasingly difficult for the historian, within the domain of conventional historiography, to deal with texts that claim to embody God's address to mortals. on the one hand, the Bible presents us with stories of God's eternal power working in, with, through, under, and beyond temporal events. On the other hand, historical methodology suggests that these stories are best dealt with if that power were not present. This methodology is weighted in the direction of a historicism that A.E. Loen has described in these terms: "Historical reality is complete in itself and God as a transcendent reality must be bracketed out" (in The Bible and the Historian, 38).

If you find the German text of Wellhausen's resignation letter, I'd like to post it on my site sometime.

Sorry, I just stole it from Menahem. He got it from A Curious Jew, who heard it from James Kugel. You could try one of them for the source ...