The historical Isaiah and the canonical process 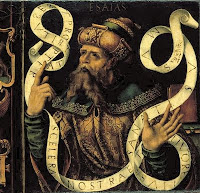 In my last few posts dealing with Childs' approach to exegesis, I have tried to illustrate that the question of authorship is important to Childs, despite what his critics claim. Admittedly, the author and his intentions are of relative importance to the meaning of the canonical (i.e. editorially enriched) form of the text. The final form has acquired an integrity of its own over against its prior stages. Nevertheless, it is of paramount importance to the validity of Childs' canonical approach that the final form of the text stands in some kind of theological continuity with what went before. It is a theological Fortschreibung, not an ideological Umschreibung. You can see his concern for this kind of continuity in his treatment of the relation between the historical Isaiah and the book that bears his name (though see also my thread Retrospective Reading of Old Testament Prophets):
Thus, there was a historical Isaiah whose preaching has been preserved in the document bearing his name. Childs references the work of H. G. M. Williamson, who claims that nearly all the parts of chapter 1 are derived from a prior written form of the words of Isaiah himself.1 Though he finds the theory speculative, Childs judges that it is helpful in showing the high level of continuity of chapter 1 with the preaching of Isaiah.2 Again, the historical prophet preached in oracles of various genres, such as accusation, invective, torah instruction, trial summons, dirge, and promise.3 These oral proclamations were collected into literary compilations which developed as the oracles were added. Within the larger narrative framework of the prophet's proclamation, clear components emerged, namely God's plan for Israel's judgement, signs of a promised faithful remnant, and the ultimate judgement of Assyria. These components were repeated and reinforced throughout chapters 1—12 within a constantly recurring pattern, even when the relationship remained often fragmentary. Again, these elements existed at the primary level of the tradition, though they appeared in strikingly different ways in the collection (cf. the exegesis of, e.g., chapters 1, 6, 7). Their development, then, was a matter of dialectic. On the one hand, faithful editors responded to the oracles, which were a major force in determining the shape of the larger composition.4 On the other hand, these expansions and additional commentary emerged within the context of interpreting new communal experiences, a process called Fortschreibung (editorial expansion). This process of expansion and enrichment had an end point with the establishment of a stabilized form.5

Isaiah 33 reflects a similar case. This chapter consists of very different liturgical forms which have been shaped into a unified presentation of Isaiah's vision of the future after the threat from the great enemy has been overcome. Childs is no longer as confident as he was in his Exodus commentary about our ability to reconstruct the Sitz im Leben of these forms. In his opinion, Gunkel's cultic theories are at best a brilliant piece of speculation.6 He is more confident, however, about our ability to perceive the work of the editors who have reshaped these forms into a literary composition. In short, the classic Isaianic pattern outlined above has been represented by an intertextual reuse of prior prophetic and psalmnic tradition. These traditions have been joined into a holistic interpretation with events taken from Israel's continuing experience with God. In the context of the narrative sequence of chapters 28-32, earlier Isaianic oracles are reused to reinterpret the events leading up to the attack on Jerusalem during the reign of King Hezekiah.7 Childs concludes from this that the context for interpretation should be the text's synchronic setting within the book,8 though this conclusion is a derivative of the intentionality of the editors and the new genre of the text (Spiegeltext)9 rather than an appeal to postmodern epistemology.

3In contrast to the majority of interpreters, Childs believes that promise oracles were part of the original message. Cf. Childs, Isaiah, 215: “There is no compelling evidence to suggest that only the message of judgement was primary and that the element of promise was always secondary from a later redaction.”