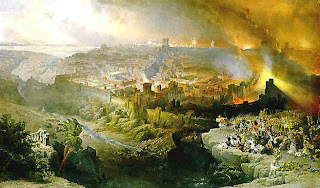 As a lion or a young lion growls over its prey,

and—when a band of shepherds is called out against it—

is not terrified by their shouting

or daunted at their noise,

so the LORD of hosts will come down

to fight upon Mount Zion and upon its hill.

5 Like birds hovering overhead, so the LORD of hosts

he will protect and deliver it,

he will spare and rescue it.

The continuity between the verses is the issue of the Lord's relation to Jerusalem, yet the Lord himself is presented as having two contradictory postures.Verse 4 compares him to an attacking lion in a thoroughly hostile action, whereas v. 5 reverses his relation to Jerusalem by means of a simile of hovering birds that shield against danger. There is no warning in the text for the "jump," so how do we explain and interpret this odd juxtaposition? In his Isaiah commentary, Brevard Childs provides an answer which looks to the broader canonical context, factors the reality of God into the equation, and draws out theological implications:

the key to the tension is first given the parable in 28:23-29, which discloses the strangeness of God's purpose with Israel. This theme is then developed further in both chapters 29 and 30, and continued in chapter 31. The major point is that the Isaianic message does not consist of a tension between pessimistic and optimistic opinions of the prophet, or between competing redactional construals or earlier and later periods. Such a developmental trajectory renders an understanding of the true dimensions of the text virtually impossible. Rather, the issue is a complex theological one that emerged already in the prologue of the book (1:2-3). How is such a lack of understanding of God by Israel possible? Increasingly in the reflective style of the sage, chapters 28-33 focus on the folly of Israel in rejecting the merciful intervention of God, which can only result in utter destruction. Yet from the disclosure of God's revelation of his purpose in creation, there remains an unswerving hope of salvation that is fully incomprehensible to human sinfulness, blinded as it is in folly and arrogance. The prophet does not offer a systematic theological tractate, but a profound struggle with a continuing encounter with God that resonate through the entire corpus as a consistent witness. Israel's judgment and Israel's redemption cohere in God's purpose even when it often appears mysterious and incomprehensible to human logic. [*]