The tradition history of the office of Moses: Childs' take 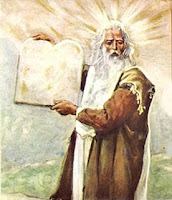 In my current series of posts (summarized here), I'm working through examples of Brevard Childs' exegesis, as found in his two commentaries: Exodus and Isaiah. We are currently interested in Childs' understanding of the particular profile of the various tradents of Israel's sacred traditions. In my last two posts (first here, then here), this was expressed in primarily source-critical categories (with a bit of editing thrown in). We concluded that these tradents were motivated by theological concerns. But this theological agenda pervades more than literary documents and their later redaction. According to Childs, a theological concern - often understood in cultic categories - was operative at all levels of the tradition, including the oral stage. Here is my summary of his complex treatment of the tradition history of the office of Moses [I should add that as Childs' career unfolded, he became increasingly sceptical about our ability to make these kinds of hypotheses. Nevertheless, as we shall see, he retained his commitment to the idea that the canonical process was inherently theological]:

Israel's witnesses did not only take the form of literary interpreters of tradition. If one digs back even further, Childs believes, there is evidence of cultic rituals and sacred offices (Childs often gives precedence to the oral stage as being of more significance for the current shape of the text than the interweaving of various sources1). His most complex theory concerns the existence of two forms of the Mosaic office rooted within ancient Israel's cultic institutions, the traditions of which were later combined at an oral stage of development before the prophetic authors of the source documents provided their own additional literary stamp.2 These two religious institutions are deduced from two conflicting narrative sequences. In the first, the people are terrified by the theophany of God at Sinai and request Moses to serve as mediator (20:18-20). God accepts the proposal and mediates the law through him. Then on the basis of the divine commands Moses leads the people in a ceremony in which the covenant is ratified (24:3-8). The ritual consists in a rehearsal of the law, a commitment by the people, and a rite involving blood manipulation which seals the pact.

On the other hand, there is a conflicting story in which God himself legitimates Moses, a decision planned from the outset by God (19:9). Later, Moses alone is given the commandments and on the basis of these laws God makes a covenant with Moses on behalf of Israel (34:27). In this tradition the people do not participate in a covenant ceremony of ratification but are simply informed by Moses of the covenant (34:32). Central to this pattern is that God's direct revelation—face to face—adheres to Moses alone and not to the people.

The stereotyped nature of these stories leads Childs (along with Mowinckel and von Rad) to the conclusion that they do not simply describe a historical event. Rather, they have a cultic stamp and function as aetiologies for the establishment of an ongoing office within an institution. Though both offices share prophetic and priestly characteristics, they differ in their institutional locations.3 In short, the first form of the Sinai tradition “had its setting in the covenant renewal festival in which Moses functioned as the prototype of covenant mediator between God and the people.”4 The second sequence also represents an office (see the frequentative tense in 34:34), though this time anchored in the institution of the tent of meeting (ch. 33), which parallels Sinai in its function as the site of divine theophanies. In this office, Moses speaks to God “face to face” and is represented as a "continual vehicle of the will of God,” a “continuous medium of revelation,”5 as well as an intercessor (34:7, 9; ) and recipient of the divine spirit (Deut 31).

In the later history of tradition, the institution of the tent of meeting declined, to be absorbed by covenant renewal tradition. This dominant form of the tradition has given the overall structure to the present Sinai narrative in Exodus 19-24. This process was only intensified by the author of Deuteronomy, who has completely overshadowed the tent tradition. Nevertheless, the tent tradition has not been completely eliminated. It still enriches the Deuteronomic concept of the office, as now a major feature of Moses' function is his intercession for the people (Deut 9:13-21;25-29). Finally, in the Priestly theology one can trace another diverging development. The vocabulary of the old tent of meeting tradition has been absorbed into the Jerusalem theology. The tent has now become identified with the tabernacle (מִּשְׁכָּן). The LORD now dwells in the sanctuary and the cloud and glory reflect the permanent divine presence. “Nevertheless, the priestly school retained its sense of continuity with the older tent tradition and continued to afford a channel for preserving traditions of Moses' office which were found in the tent tradition, such as the shining face of Ex.34.29ff.”6

The final set of tradents are the redactors, who have attempted to bring these disparate though interrelated traditions-turned-source documents into a unified narrative. Thus, in the sealing of the covenant narrative (24:1-18), Childs identifies the following signs of harmonization:7

If you need your ex-girlfriend or ex-boyfriend to come crawling back to you on their knees (even if they're dating somebody else now) you got to watch this video
right away...

(VIDEO) Get your ex CRAWLING back to you...?