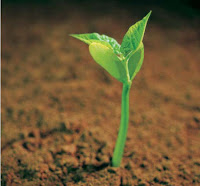 A friend of mine recently e-mailed me his philosophical/psychological interpretation of the following two biblical verses:

"If a grain of corn falls to the ground and does not die, it stays one/alone [monos]. But if it dies, it bears much [polun] fruit."

"The one who loves his life shall lose it, but the one who hates his life in this world shall keep it to eternal life.”

If I can summarize his thoughts in a brief paragraph, he basically finds the idea of "dying in order to live" to be incredibly life-affirming. The revitalizing energy of the divine reality exceeds our ability to comprehend or exhaust it, so that as long as we humans continue to insist on doing things "our way," accepting God only on "our terms," we cut ourselves of from this external source and end up cooking ourselves in our own soup. Hence, one must die in order to truely live (this is a heavy paraphrase).
I responded to this with my own understanding of these two verses. His response to my response was as follows:

Phil I'm somehwat removed from the everyday western reality - as far as my aesthetic convictions go - but you live in THE MOST EXTRAORDINARY world I think I've ever been exposed to. To be honest I've always been a hint afraid of ventruing too near you as (as I remember you) you struck me as a little dogmatic. But now when you articulate your beliefs in the way you just have - it's utterly astonishing.

Well, here's what I wrote - I'd love to know what others think:

In its biblical context (as I understand it) the passage has an eschatological dimension that is totally life-affirming, though in a slightly more paradoxical and radical way then simply creating the psychological conditions for receptivity to “the Divinity.” It's predicated on the idea that the life of the created world has gone awry and is in need of rectification. We humans are part of the problem, given our hearts of stone, and so God has intervened from the outside, stepping into history to save the world. Because this world cannot help itself, it is dependent on this help from the outside. Death, then, both negates this life and reaffirms it in that it creates space for something new, and that which is new (the “new creation”) is a perfection of what was originally there but had become perverted (a return to Eden?). So dying in order to live is both an affirmation of the world and a judgement of it. On the lips of Jesus it's an echo of his crucifixion and bodily resurrection, the supreme moment in which God himself takes the evil of the world onto his shoulder and in death “exhausts” its power. With the resurrection of Jesus we have the first instance of new creation, the true life which is what creation was all about in the first place, a life which is both continuous and discontinuous with the imperfect life we know now. That's why the agricultural metaphor gets used further as Jesus is described as the “first fruits of the new creation.” Paul develops this further in Corinthians, where he applies the idea to all believers. I'd read what he has to say. The seed metaphor gets developed further and we see its true biblical meaning as referring to God's eschatological renewal of the cosmos. The implication is that we who accept Jesus into our lives, who are enabled to participate in his cross-and-resurrection-work, are also born anew with birthrights to this new creation, which is still only anticipated in the present and waiting for consummation. Hence the missiological dimension of Christianity: we need to proclaim this good news to the world that Jesus has conquered death and sin so that we too, sinners once contributing to the corruption of this life, can be redeemed and participate in God's work of salvation.

I'd say that your comment is a splendid bit of theological reflection, Philip!

I have a hunch your friend would be even more surprised if you discussed how Col 1:24 could be related to what you just wrote :)

Col 1.24: Now I rejoice in my sufferings for your sake, and in my flesh I am filling up what is lacking in Christ's afflictions for the sake of his body, that is, the church,

Interesting. I'm not sure what I would make of that right now.

Phil, I think you are not weird. This life-giving stance is fruitful - but the fruitfulness is not necessarily known by the grain that falls to the ground. We don't hear enough of the abundant life except through the consumer model - which fails to give itself up and so deceives itself into thinking it is rich. Nonetheless, one who conforms to the death of Christ is not necessarily aware of the impact on others. I was moved that your friend found your words astonishing - tov, tov, tov is my response. This is part of the responder's resurrection. May you be blessed in your blessing.

my friend is planning to visit to discuss this topic further, so I'm guessing the shock wasn't too off-putting.