The Relationship between Exegesis and Dogma: Childs' View 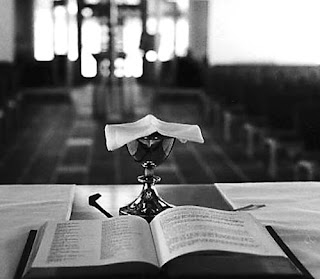 There's a bit of discussion going on at the moment in the blogosphere concerning the relationship between exegesis and dogma. I've already mentioned Christ Tilling's posts here. Mike Bird has made an independent contribution to the discussion here which is rightly corrected by Ben Myer's brilliant post here (though Mike responds in the long comment thread) with Doug's spot on reflections here. My tiny contribution to this discussion shall consist in quoting from that master of theological interpretation, who spent his career wrestling with the relationship between dogmatics and exegesis, Brevard Childs. This comes from his article, "Does the Old Testament Witness to Jesus Christ," in Evangelium, Schriftauslegung, Kirche (1997), 60:

"... it is an important caricature of the relationship between exegesis and theological reflection to suggest that the former is an independent historical and philological exercise which seeks objectively to discover what the text actually says, whereas the latter is a subsequent and subjectively reflective activity, largely of a speculative nature. This misleading mischief goes back at least to the time of Gabler. ... Rather, I would argue that the relationship between exegesis and theology is a far more complex and subtle one which is basically dialectical in nature. One comes to exegesis already with certain theological assumptions and the task of good exegesis is to penetrate so deeply into the biblical text that even these assumptions are called into question, are tested and revised by the subject matter itself. The implication is also that proper exegesis does not confine itself to registering only the verbal sense of the text, but presses forward through the text to the subject matter (res) to which it points. Thus erklären and verstehen belong integrally together in the one activity and cannot be long separated. ... In itself the presence of a dogmatic decision accompanying the exegetical task is of little consequence; rather, the crucial issue turns on the quality of both the exegetical analysis and the theological reflection in relation both to the text and the subject matter. Recent critical work[*] on the problem of determining a text's sensus literalis has made it abundantly clear that the literal sense was never confined to a verbal, philological exercise alone, but functioned for both Jews and Christians as a "ruled reading" in which a balance was obtained between a grammatical reading and the structure of communal practice or a rule-of-faith (regula fidei)."

[*] R. Lowe, "The Plain Meaning of Scripture in Ealry Jewish Exegesis" (1964); B.S. Childs, "The Sensus Literalis of Scripture: An Ancient and Modern Problem" (1976); K. Greene-McCreight, Ad Litteram: Understanding the Plain Sense of Scripture in the Exegesis of Augustine, Calvin and Barth of Genesis 1 - 3 (1994, Yale University dissertation).
Posted by Phil Sumpter at 13:28

It seems to me that Childs's view here is simply an unpacking of a "theology of the Word" paradigm. Choose any other paradigm (such as, for example, the propositional testimony paradigm of the apostles), and all bets are off.

But then . . . I've never encountered anyone who works within the theology of the Word paradigm with the ability (or willingness) to think in any other terms. Whenever they're called to do so, if only for the sake of a fair engagement, they simply attack those who think otherwise by labelling them either "liberals" or "fundamentalists". That's what makes this debate so frustrating for me. (I don't mean my debate with *you* personally, Phil. I mean the debate between Barth's spawn, in all of its forms, and those of us who derive our foundational commitments directly from the New Testament.)

your post on Doug's blog was very useful in clarifying the model you have been discussing. I'll have to chew on this for a bit! Thanks for the Childs quote as well. I'm a bit happier with "dialectic" (you'll pardon me if I keep pushing you to articulate the nature of this dialectic between textual witness and subject matter) than "interpreted Scripture in the light of the easter event" (which sounds a bit one-sided). Again, many thanks.

I'm afraid I don't know what you mean by a "theology of the word." Could you explain this?

As for Childs' open-mindedness, a common point of praise from almost all commentators, both fans and critics alike, is Childs' incredible grasp of the secondary literature and willingness to engage in any serious debate. Thus he is able to talk of the challenge and promise of the Enlightenment at the same time, without blanket judgement, he is able to affirm a committment to the MT while seriously enaging with Catholic arguments for the LXX, he spends almost an entire book analysing the hermeneutics of the ancient church, despite his passion for the Reformers. He reads critical as well as conservative commentaries (cf. his isaiah commentary, usual for a scholar of his calabre) and is fair to both. Whether one agrees with his proposals or not, closed mindedness is the last thing he can be accused of.

thank you for pushing me on this issue. It's complex and I'm still trying to get my head around them too. I intend to respond more often, though at the moment work is getting on top of me.

You're right, dialectic is Childs' preffered term. Seitz's writings emphasise the exegetical dimension of the process,as I highlighted in my "In Accordance with the Scriptures" thread a while back.

You asked previously if it is worth keeping the patristic terms sensus literalis and sensus spiritualis. They are certainly loaded with all kinds of connotations. Childs also tries using Dithey's categories of erklären (explanation) and verstehen (understanding). Having said that, almost every aspect of the Christian faith is loaded with negative connotations. I'm not sure if changing the terminology every few years will solve the problem. In addition to that, I believe that the theologians of today have an obligation to acknowledge their spiritual and intellectual roots, whether they find them embarrassing or not. All theology is a mixture of truth and falsity. What unites us with the past is the Holy Spirit and the fact that we are engaged in a common struggle. I think using classic terms can help highlight this common heritage and pushes to the forefront the fact that we stand on the shoulders of others with whom we are in critical yet thankful dialogue.

Phew, that was quickly typed out: I hope it makes sense ...