What Was the Deuteronomist Doing with the Law? 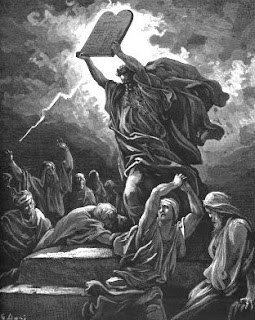 I've recently started jogging, something I actually hate doing. But since discovering Christine Haye's brilliant audio Introduction to the Old Testament (Hebrew Bible), which I've downloaded to my iPod, I've come to enjoy the mix of bracing winter air, sunrise over the Rhine, and fascinating Jewish introduction to the Tanakh in a cute American accent.

She said something today which reminded me of a thread I finished a while back, in which I looked at the nature of the relationship between the different redactional layers that constitute the Bible.

But the question is: what is the relationship between the differnet versions of the legal material? Some of these laws will parallel each other quite closely and others do not. So are Deuternomy's legal traditions a direct response to, or modification of, the laws in Exodus and Numbers, or are they best understood as just different, independent formulations of a common legal tradition? Weinfeld has argued that Deuteronomy is dependent on the previous traditions of the Pentateuch; Deuteronomy revises and reforms them according to new ideas, its new notion of a centralised cultic worship, and secondly its humanitarian spirit. ... Deuteronomy would have been seen as an updated replacement of the old Book of the Covenant, rather than its complement. They exists side by side in our texts now, but I think in his view those who promulgated it were understanding it as a replacement of the laws of the Book of the Covenant.

In a previous post I quoted Childs as saying the following concerning the extension of tradition:

Prophetic authority is related to the function of the biblical text. The text is the tradent of authority in establishing a link with specific prophetic figures. The literature has no life apart from Israel's life, institutions, and offices. The prophet serves as the living voice of God now preserved in a living text of Scripture. The text can certainly be extended beyond the scope of the original prophecy, but the theological link with its origin must be maintained in order to sustain its authority.

(For the full thread go here)
Given Childs' views on the significance of the nature of the relationship between layers of the text, I wonder how he would have responded to Weinfeld here.
NB. Awilum reflects on Hayes' iPod lecture series here.
Posted by Phil Sumpter at 18:37

One model: see Bernard M. Levinson, Deuteronomy and the Hermeneutics of Legal Innovation (Oxford, 1997). Levison argues that Dtr uses and modifies the Covenant Code in order to challenge it and replace it.

One thing I appreciate about Levinson is the precision with which he describes how Dtr uses CC. This is in contrast to others, who use the term "interpretation" (or worse: "reinterpretation") to describe EVERYTHING that an author does to/with an earlier text.

Additional thoughts:
The words we use to describe one author's reworking of an earlier text (reuse? reworking? revision? replacement?) must be carefully thought out. Was the Chronicler intending to "replace" or "compete" with the DtrH? In what way? (Was Luke intending to replace Mark? Was Tatian intending to replace the Gospels with his Diatesseron?)

And if one author was attempting to offer a complementary (?)/alternative (?)/interpretive (?) competing (?) account, we still have to ask ourselves why Second Temple readers read them as Scripture, and juxtaposed and edited such books into a collection.

Phil - you’re really jerking my chain here! And you know it.

There’s an extreme and maybe impassible threshold question about the Deuteronomic legal corpus vis it antecedents and subsequent redactions. Your compatriot Albrecht Alt didn’t goof things up as much as some way (Gerstenberger) with distinctions between apodictic and casuistic law belonging to different “communities” (that word again) with different hermeneutics. All the same questions I wrote to you in both of the two other posts (Bonhoeffer - what is this, “German” day?) about community, and more so concerning “police,” apply to Alt!

As an aside, but not as an aside: you could probably write a whole PhD on this. The so-called hybrid community of Canaanite casuistry is a very nice potential counterpoint to the same kind of casuistry (practical application: courts, praxis) of Bonhoeffer’s secret German “police.” What I was trying to tell you in the other posts about Bonhoeffer’s two different “communities” – the Confessing Church, and the German secret police – is another variation on Alt’s sense of two different communities behind the law. One “community” (cultic, or for Bonhoeffer the Confessing Church) doing the apodictic teaching through the law, while the other community (Canaanite legal casuistry, for Bonhoeffer, the secret police) doing the hard-core practical applications in real-life judgments. Enough of this for now.

My point here is not whether Alt was right or wrong. One point here is that the legal corpus is ignored, discounted, or explained away by “narrativists” who miss the profoundly simple fact that if narrative is to have any value beyond telling more stories (like NT Wright makes narrative do), then at some point, you will need to get down to casuistry in real practice! Casuistry is praxis.

And like I’ve belabored in my other posts ad nauseam: the difference between law and narrative is problematic if not artificial. The two are embedded in each other in ways in which “narrativists” seem horribly ignorant.

And Alt wrestled with.

Given the distal processes (distant in time) and the horrible loss of soft evidence that dynamically affected the text (text as hard bone), it’s simply indeterminate from our view whether the entirety of higher criticism shows a process of textual ossification that is as much exclusive as inclusive of the lost voices. Tell me the meaning in historical context of Elisha’s bald head; or, whether he had a bald head. More below.

For example, play along.

Jethro comes to Moses. Moses is trained in all the law of the Egyptians (again, play along: Moses as composite, Moses as individual - forget that stuff for now). Jethro introduces a legal reform.

What does that mean?

What set of differential equations did God (oh, excuse me -- the "community") have in mind to bless some parts, curse some parts, modify some parts, ignore some parts, and incorporate by reference some other parts of Jethro’s legal reform?

Just what did God (er, the all-sacred god of the “community”) have in mind no less for blessing, cursing, modifying, ignoring, and incorporating by refence all the rest of the corpus of Egyptian and Canaanite law?

Legal scholars like Finkelstein have tried longitudinal studies to address these questions. Alt had his own views. Scholars ramp up the comparative studies every day.

We don’t have the goods. I don’t think we ever will have all the truly necessary “soft evidence” required to know the dynamics of the mix.

Not for ancient texts. Forget it.

For example, in Germany and in the U.S. today, we expect our legislative bodies to publish their public policy reasons, to publish their debates on the floor, to publish their legislative arguments, to publish the data sets used (science, trial and error in law, changing conditions like changes in banking laws now due to the economy) -- in short, we expect to know the legislative history and reasons for our laws. And even when our law-making bodies do all of this faithfully, even then, it’s often impossible to discern the exact mix and match of all these published materials in order to discern just what differential weight is given to each different process: scientific data, policy arguments, common sense and best guesses at which version of the law is better, political compromise, secret deals cut in the back rooms, fudged and vague language in the final laws – the list is endless. The sum of causative factors in our modern laws is extremely difficult to parse.

But, the publication requirements are necessary parts of how we do modern legal hermeneutics.

We have nothing nearly like that for ancient texts. It’s all just a guesswork.

That’s why the analogy to anthropology’s stuckness with mostly hard evidence. Too much is lost.

What’s not lost today is the simple fact that if you really want to move beyond doing theology in an ivory tower, then you’ll need to move into a praxis of casuistry. See Toulmin and Johnson, “The Abuse of Casuistry.” That book should be on any theologian’s docket.

Unless you can get God on the dock to run all the differentials used by Moses and company -- the "D" side of the JEDP equation – is lost in the soft evidence.

Thanks for the reference Michael. It is this kind of precision that I think Childs is calling for, as determining just exactly what the relationship between the various layers is has significant implications for the canonical approach. “Canonical process” is a process with a certain “quality” for Childs.

You are also right that it is important to ask why later communities read the various layers together at all. Answering this may help answer the first question, i.e. what was the “nature” of the relationship. On a more apologetic level, I think Childs would argue that the forces at work in the development of the Bible are similar in kind to those that shaped the community's interpretation of the Bible. That's why the text's Wirkungsgeschichte is so important – it helps identity what is really going on in the text.

thanks for your thoughts.

a praxis of casuistry

I'll have to think more about what that means ...

Interesting analogy to modern law. Thanks for that. I agree that it's as good as impossible to figure out what the process was, despite the amount of energy dedicated to the endeavour over the last couple hundred years. It would be nice to ignore the question and just "read the final form of the text" as a narratively enclosed world, but the text itself begs the questions. And even if the questions can't finally be answered, given Christianity's/Judaism's groundedness in history, it's worth working through some of the possibilities and working out which ones are viable, which not, and which one's if trut would challenge our faith. There is a second order apologetic dimension to the issue I guess, one evoked by our modern context. Having said that, I don't see much difference here between historical critical "gap filling" and ancient midrash. It's just that the nature of the challenge has changed.

Interesting point about "Germans," by the way. You may have guessed that I'm a Childs fanatic. He was really inspired by the confessing church (Barth, von Rad, Bonhoeffer, Diem, Kähler etc. Not so much Bultmann). Fascinating that a potential source of theological renewal could grow out of that context.