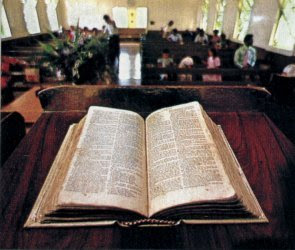 I have outlined the "problem of the Christian Bible" here, with its "Protestant" response here and its "Catholic" response here. How does the father of the "canonical approach" respond?
Childs clearly prefers the former option. In his Introduction to the Old Testament as Scripture he wrote

The threat which is posed by overemphasising the discontinuity between the Christian and Hebrew Bible is that of severing the ontological relationship between Christianity and Judaism. (671).

Nevertheless, he is aware that the issue remains unresolved and calls for respect of this diversity. A “kerygmatic,” i.e. christological, reading of Scripture leads to a view of the situation as a polarity between Word and Tradition, which find their analogue in the broader and narrower canons. The church’s task is to stand within this tension, struggling to continually discern the truth of God being revealed in Scripture while at the same time being aware that she stands within a fully human, ecclesiastical tradition which remains the tradent of the Word. To summarize:

the complete canon of the Christian church as the rule-of-faith sets for the community of faith the proper theological context in which we stand, but it also remains continually the object of critical theological scrutiny subordinate to its subject matter who is Jesus Christ. This movement from the outer parameters of tradition to the inner parameters of Word is constitutive of the theological task. [*]