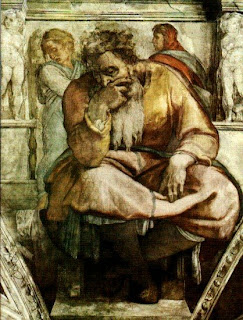 The fourth example of a canonical approach to the prophets:
A body of prophetic tradition has been edited in the light of a larger body of canonical literature. From the perspective of literary criticism, the message of Jeremiah has been cloaked in the later prosaic language of the Deuteronomic school. But from a canonical perspective, Jeremiah's words have been preserved in conjunction with a commentary which sought to understand his ministry as part of a chain of divine messengers who were loyal to the law of Moses and who warned of Jerusalem's coming destruction. Thus, the ordering of Jeremiah's message within the tradition of the preachers of the law provides the later community with a prophetic interpretation of how the law properly functions within the divine economy.

Closely allied with this move is the dovetailing of traditions from the oracles of Isaiah and Micah (Cf. Isa. 2:1-4 and Micah 4:1-4). From an historical perspective one could argue for a common circle of tradents who transmitted both sets of tradition. But from a canonical perspective the effect of the process is to provide each prophetic book with a commentary in the light of which a mutual enrichment is to be drawn.
Posted by Phil Sumpter at 15:16