The greatness of von Rad 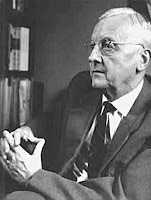 Jim West has noted the recent birthday of the illustrious von Rad (21 October, 1901). Interestingly enough, despite Jim's early passion for von Rad and his ongoing indetebness to his influence, he goes on to say:

I also find myself oddly estranged from him, and, strange as it will sound, that pains me a bit.

This has reminded me of one of my favourite Childs quotes. I'm not entirely sure if Jim and Brevard are talking about the same thing, but there sounds like a hint of commonality ... Perhaps it depends on what it is about von Rad that they feel "estranged" from?

As a young student who had fallen under the spell of von Rad, I shared with many others the conviction that his brilliant method held the key to a proper understanding of the OT… Yet [in the next generation] much of the excitement which his early post-war lectures evoked had died… Slowly I began to realize that what made von Rad’s work so illuminating was not his method as such, but the theological profundity of von Rad himself. The same observation holds true for Wolff and Zimmerli. I am convinced that no amount of methodological refinement will produce a quality of interpretation which that generation achieved whose faith in the God of Israel was hammered out in the challenge to meet the Nazi threat against the life of the church. [*]

By the way, Jim installed a voting box posing three options: Gerhard von Rad ... 1) Was a fine OT scholar; 2) Was the finest OT scholar of his day; 3) Was not a very good scholar, but then, I'm an idiot so what do I know? I went for the second option, but that only makes up 29% of the votes! Who else could have competed?

I would go with option 1. I prefer Sigmund Mowinckel over Gerhard von Rad but then, I'm an idiot so what do I know?.

I voted for no. 2 but technically belong in category 3, so I'm obviously just being pretentious.

I haven't got round to reading Mowinckel yet, but intend to. What do you like about him so much?

I suppose my delight in Mowinckel's work is that he makes connections between texts that I would never have spotted in a million years. His work on the cultic setting of the prophets and psalms leaves my heart pounding with excitement. Sounds bizarre I know but there it is.

Thanks, he'll be necessary reading. I think, however, that a canonical reading will have a slightly more oblique relationship to the original cultic setting that Mowinckel reconstructs. We'll have to wait and see!

mr psalty is right when he notes that mowinckel is important. and i like him very much. just not as much as von rad.

and perhaps - regarding childs- we really do share something!