Who are Abraham's heirs? 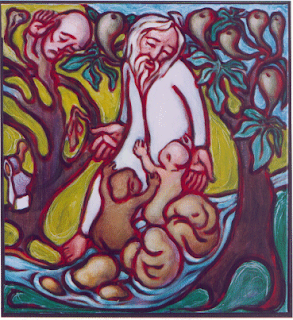 As usual, Halden of inhabitatio dei tackles this question with eloquence and insight. As he states in the comments, his position is essentially a "Johannine" one. In conclusion he writes:

Thus, from the perspective of inter-religious dialogue, one key element that distinguishes Christianity from the other two Abrahamic faiths is Christianity’s explicit denial of what the other two vehemently claim, namely that “legitimate” descent from Abraham substantiates the claims of their faith. Christians make no claim to be legitimate children of Abraham, rather they claim that their status as God’s people is derived from nothing inherent within themselves either ethnically or politically. We are the people of God solely and only because of the radical miracle brought about in Jesus Christ which shatters and scandalizes any “natural” claim to be God’s people through historical natural succession.

In the recent words of Brian Welch: "It's all spiritual now" (OK, Halden's more nuanced than that).
Read the whole thing, including various insightful comments. Here's my response:
I'm uncomfortable with this. Though my knowledge of the New Testament is woefully inadequate to give a proper response, I'll do what I can because the issue is important to me. Some thoughts:

You say: Christians make no claim to be legitimate children of Abraham . Doesn't Paul speak of adoption? It's one thing to talk about the new spiritual nature of the community (agreed), it's another to talk about the nature of the transition from “flesh” to “spirit” and what that means for the flesh itself. I think this is a key issue. There's an eschatological dimension to this which is just awkward and can't be easily resolved with reference to the “spirit.” Biblical theology seems to be constantly caught up in a dialectic between different poles which can't be resolved with this fallen world. Thus, we have dichotomies between letter and spirit, flesh and spirit, heaven and earth, this world and the next, divine and human, normal time and eschatological intervention, the Old and the New etc. I don't think it's doing enough justice to the Bible's understanding of salvation history to evaporate the earthly in favour of the spiritual, as if biological descent can simply be rejected now that something “spiritual” has happened. There is genuine newness in the New, but it's always testified to in terms of the Old, which isn't simply discarded now that the New has arrived. It is transformed, perhaps, but the crux is the relation between Old and New and not just whatever the New has brought. Again, what is the nature of the transition and is there not some form of tension that needs to be maintained?

This is undergirded by what I take to be an important hermeneutical principle: the Old testament is as much a witness to the Truth as the New. It is not the case the the New has figured everything out, nor that the New is the fullfillment of the Old. Rather, both point to one reality and their relation to each other is dialectical. As a result, it is not enough to quote New Testament verses as a foundation for our understanding of the people of God. It needs to be balanced out with the Old Testament, and perhaps even be “corrected” by the OT, in light of the one subject matter. Thus, according to some OT theologians, the heart of the Old Testament consists in a concrete relationship between Jhwh and his elected nation Israel. Psalm 147:20 states: “He has not dealt thus with any other nation; they do not know his ordinances. Praise Jhwh!” In a real sense, a non-Jew reading the OT is reading “someone else's mail.” The question is, what constitutes our right to be considered the addressees of these texts? Language of “ingrafting” and “adoption” in Christ seems to be the rule. The fact that the Jews haven't believed seems to be an anomaly for Paul which he can't understand, rather than an irrelevancy due to the insignificance of biology.

Again, isn't quoting New Testament verses in order to reject the election according to the flesh like reading John instead of the Synoptics, or Chronicles instead of Kings? There are different genres of witness which need to balanced with each other (as you know, of course).

In sum, I don't know enough of the details, but I think the tension between fleshly and spiritual election needs to be maintained. As a result, according to at least one construal, Christianity and Judaism belong on one side of the divide as the true heirs of Abraham—though in different, paradoxical senses—and Islam on the other, as a forgery. The divide you offer above is not wrong per se. It just needs to be maintained as part of a larger, eschatologically awkward whole.
P.S. I belatedly note Halden's latest post in the thread: Church and Israel - Christianity and Judaism. I am in full agreement.
Posted by Phil Sumpter at 19:30

Philip, a truly "spiritual" election, I agree, does seem to run counter to Paul. For him, there is one olive tree into which Gentiles have been grafted (Rom. 11:11-24). But how are we to understand the natural branches being broken off? These natural branches seem to be individual members Israel, some of whom were broken off so that Gentiles might enter that community. For Paul, the anomaly that the Jews rejected the Messiah is providential, so that, in bringing the Gentiles in, God might provoke ethnic Israel to return to to Him. The Gentiles, therefore, take on the mirror calling of the Jews. Whereas the Jews were called to be lights to the Gentiles, now the Gentiles are to be lights to the Jews. This, in the end, will culminate in all Israel being saved.

I do, however, agree that Christianity and Judaism each belong together in the tri-fold divide of Abrahamic faiths. But I would nuance it a bit. The Christian faith, at least since the early partition between Judaism and Christianity, has been primarily a gentile populated religion. But it seems that, in Paul's vision, ethnic Israel and the "fullness of the gentiles" will one day reunite in Christ (Rom. 11:25-36). This means that God's promises, in their redemptive historical course, are for both ethnic Israel and the largely Gentile Church. But each of these promises finds its yea and amen in Christ.

Hi Douglas, thanks for your thoughts. Thanks for drawing my attention to the brocken branches image. You're right, I don't know what to make of it, apart from that it is some kind of mystery within God's eschatological plan. I have to say, it does seem odd to me at times. I'll need to look at Romans in more detail, but as far as I understand, the passage is hotly debated.

each of these promises finds its yea and amen in Christ. I'm in total agreement here.

Our Identity Protection is so strong, the U.S Government uses it. Get protected NOW.