M. Noth on The Laws in the Pentateuch 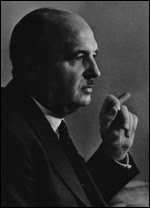 In my last post I claimed that B.S. Childs was committed to the “historicality” of the Bible, i.e. its nature as the product of particular people in particular places and times. Not only is it important to come to terms with this dimension of the text, Childs' entire“canonical project” stands or falls depending on how one construes “what actually happened.” To be sure, he allowed for a lot of leeway concerning the historicality of the events portrayed—Childs was no conservative—but the options are not infinite. In order to help us understand what kind of history needs to have taken place, I will illustrate by looking at the critical reconstruction of the history of Israel's laws by Martin Noth.

Childs did not exactly wax lyrical about Noth as he did about von Rad, and “theologian” is not the first job description that comes to mind when one thinks of him. Noth was a historical critic through and through; his passion was uncovering the development of the traditions that eventually led to the final form of the text. Nevertheless, in his actual work we see a sensitivity to the theological dimension of the traditions which Childs held to be critical. Childs respected Noth's work and refers to him positively several times in his Exodus commentary. Though there is certainly plenty in Noth's work that is worth criticising—both historically and theologically—I believe attention to the nature of his historical proposals reveals an attitude common to German critical scholars that formed a positive matrix for the development of Childs' own thinking.

I should add that it is not my concern to evaluate the historical validity of Noth's suggestions, but rather to see their relevance to understanding Childs' canonical approach.

In his essay, Noth is concerned to uncover the “true nature” of Old Testament laws, which, despite their diversity, are still “an entity of a particular type.” He starts with the general observation that all human laws require a particular social context in order for them to make sense. In the case of the variegated laws of the Pentateuch, this social context is the “sacral confederacy” of the twelve tribes of Israel. In other words, the social matrix in which these particular laws have their being is not primarily political, it is theological. They are, according to the self-understanding of this confederacy (or “amphictyony”), grounded in a covenantal relationship between Yhwh and his elected people, a relationship which is exclusive and to be guarded at all costs. These laws, in other words, only make sense and indeed only have their validity within the context of a theological construal of a divine/human relationship. Yhwh has “graciously” (to use Noth's term) elected his people and out of this election the people respond in obedience.

This concrete, theological entity known as “the twelve tribes of Israel” (in distinction to the purely political entity of the northern “state of Israel”)continued throughout the historical vicissitudes of Israel's history, up to and into the exile. The power of this sacral confederacy is manifested not only in its ability to survive the political developments of the davidic kingdom, the division of the kingdom and the Assyrian invasion, but also in its impact on the development of these political realities. According to Noth, David's election of Jerusalem only worked because he moved the cultic centre of this amphictyony to the city, and the kings themselves were subordinated to the demands of the sacred laws. Even the “Josianic reform” was done in deference to the prior claims of this religious entity. The law book discovered in the temple, according to Noth, was not an expedient invention of the part of Josiah in order to further his own cause, it was a collection of genuine amphictyonic laws which needed to be inaugurated by a covenantal ceremony involving Yhwh and his people. The laws were made operative, “not by an act of state, but by a sacral ceremony” (45). And not only was this event inherently theological, it was theological in deference to and in continuity with prior Israelite tradition. In this sense, Noth can say that “the introduction of the deuteronomic law under Josiah took place under those circumstances to which the law belonged, on its own showing” (45).

As such, the theological reality which undergirded the amphictyonic league had a concrete Wirkungsgeschichte (i.e. it constrained the direction of later tradition). To be sure, according to Noth, the path hence taken was not straightforward. Josiah did turn this sacred law into state-law, thus shifting its emphasis and later kings disobeyed it altogether. Yet despite everything, the sacral confederacy, and thus the basis for the legitimacy of the laws managed to survive until it was totally destroyed by the exile. But even here, Noth is keen to point out that the decisive element in the dissolution of this group was not political but theological. A cult of sorts could still be carried on at the site of the temple, and there was still a remnant that could lay claim to being the “true amphictyony.” The break came with the pronouncement of the pre-exilic prophets, whose prophecies were confirmed by history, that God had decided to end his relationship with his people. If God pulls out, then the ground upon which the law stands is destroyed.

Without the basis of the confederacy, the law should technically have become invalid. Nevertheless, it persisted in fits and starts amongst competing groups out of competing reasons. Some refused to believe that the relationship was over and hung on to the laws, with prophetic backing, which were now understood within a framework of expectancy of restoration. Others promised the inbreaking of something completely new and discontinuous with the past. Whatever people's hopes, they were not realized and so the old laws became fossilized specimens, detached from their original context. The laws remained “by the power of inertia.” Given their detachment from the theological reality that gave birth to them, these laws became absolutized. No longer were the laws dependent on the “community of the redeemed” (my phrase), but rather the community defined itself in terms of its of a now abstract law, understood to be a self-contained entity. “Covenant” lost its true meaning, morphing into something legalistic, whereby the “salvation by grace” of the amphictyonic league is replaced by works righteousness as God is understood to respond to his people on the basis of their fulfilment of “the law.”

Protestantism anybody?
Posted by Phil Sumpter at 16:03

Don’t ask why. But, as I read your good summary of Noth (very nice job), I bizarrely saw Nietzsche.

I didn’t see “Protestantism” coming because I paused at each of your Noth paragraphs and I hadn’t yet scrolled down to the bottom of the page!

Your Noth summary made me suddenly feel that Noth was re-cooked Nietzsche: Noth’s “competing groups” unmoored from confederacy (map: to Nietzsche’s genealogy of morals via competing in-confederate groups arguing moral justifications for non-moral acts); Noth’s various groups refusing to believe that “relationship was over” (map: Nietzsche’s “Merry Science” of persistent and stubborn faith in eternal recurrence despite haunting notions that God is dead); Noth’s claim that fossilized laws endured after confederations because laws became elevated abstractions and arbitrarily conceived as autonomous (map: Nietzsche’s critique of our arbitrariness in invoking abstracted-autonomous “laws” in blatant service of our wills to power: though I don’t blame Nietzsche for what happened in Germany afterward); Noth’s notions of works righteousness and legalism for its own sake (map: to Nietzsche’s “Anti-christ” evincing Nietzsche’s contempt for reified-abstracted values as producing slaves and legalistic crusades).

How sick is all that?

Only on a blog!

So, when I saw your validly sarcastic note - “Protestantism anybody?” - well, that took me over the top! I suddenly saw Nietzsche as the consummate anti-Protestant protestant. And Noth stealing categories and thematic frames from all of them! Don’t ask why. I'm clueless. But, this whole mess was just too fun not to post.

I took a class on OT at a Catholic seminary that paid very heavy respect to Childs, and, about the same time I took guided post-grad research at Chicago from Rendtorff (during his visit there) –- to the end of arguing against the Catholics that Childs’ idolatry of “canon” (my bias - Childs is a bibli-idolater) allowed those Catholic-loving-canonists to make individual OT figures like Abraham and Moses into composites incorporating grand histories (they had no problem with this: it’s all a seamless “tradition”), while simultaneously arguing against Rendtorff that Noth better than Rendtorff pegged law to fragmentary traditions (Rendtorff won these arguments, by the way: damn Germans; but really, Rendtorff convinced me that Noth is a bit fanciful).

And so, I’m ready to re-visit Childs with you. Via Noth.

Who knows: maybe I’ll have a better valuation of Childs when you’re finished working me over.

So, it's your turn Phil. Do your magic.

Phew, you've set the stakes high! I'd be interested to hear your thoughts, especially why Childs is a “bibliolater.” As a Barthian, “biblicism” was an error he constantly tried to avoid, which he tried to do by using the category of “witness” in order to define the “genre” (if you can call it that ...) of the multiple traditions in the Bible.

Phil! Sorry! I posted a response over on your new thread -- on legalism.