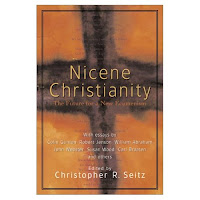 Many thanks to Brazos Press for sending me a review copy of Nicene Christianity: The Future for a New Ecumenism, (ed. C. Seitz; Grand Rapids: Brazos Press, 2001).

On one level, Nicene Christianity is a collection of essays by some of the world's top theologians, each exploring one article of the Nicene Creed. The quality of their work, the diversity of their denominational backgrounds, and the significance of the Nicene Creed within the global church are reason enough to purchase and study this book. But what makes it truly special is the context out of which it grew: an ecumenical conference held with the goal of renewing the contemporary church by returning to its theological and pragmatic roots in the pre-schism church. As Philip Turner says in the “Introduction,” the authors are united by the conviction that “theology is a practice with a soteriological goal that is properly carried out within the life of the church” (9). As such, it must be carried out in deference to a complex of practices broader than just the “intellectual.” According to these authors, Nicene Christianity “anchors the church in those beliefs and practices without which the church can preserve neither its unity in Christ nor its identity as Christian” (10). It is this holistic vision, grounded in the historical reality of a common and commonly validated past, that enables this book to make its unique contribution to the church's ongoing vocation in the world.

For the sake of space, this review will be divided into two posts. In this post I summarize three essays that frame the collection, giving background to the the concept of Nicea and the creeds as such. In the following post, I will work systematically through each of the articles of the creed, highlighting in the barest form possible the main lines of contribution each author makes.

Philip Turner opens with an “Introduction,” in which he provides background information on the nature and function of creeds within the church of the first millennium. They were “tokens or badges of Christian identity,” adequate expressions of Christian belief, guides for reading Scripture, and standards of truth. He applauds the current volume for its exhaustive treatment of the whole creed, rather than a truncated form which highlights one aspect at the expense of the others. Yet, he claims, if one is to maintain the spirit of Nicea, one must also situate the creed in its appropriate context. A form of Christian practice is required, a certain way of life. The corollary is that the church, rather than the secular academy, becomes the most appropriate setting for theological practice. But again, in the spirit of Nicea, the church as it is now not a sufficient context. A particular kind of church is required, one characterized by discipline and order. Church governance is an area in which Nicea has a lesson to teach to the modern church, a lesson, Turner believes, which under-represented in this volume (though see Radner's contribution).

In the middle of the collection of essays, we come to John Webster's excellent article on the nature and function of creeds in the church. For Webster, the true context for their interpretation is theological, i.e. the triune economy of salvation. As such, they are a response to God's grace, representing an episode in the conflict between God and sin that is at the centre of the drama of salvation. Although public and binding, their purpose is not to codify the truth. They cannot do this because of the transcendence of their subject matter. Rather, their function is to herald or testify God, who as “free transcendent presence” is communicated most fully and authoritatively in Scripture—God's elected means of grace. The Creed, then, is subordinate to Scripture as norm. It also gathers the Church around this subject matter in fear, trembling, consolation, and joy. It binds because the Gospel binds, making the act of confession the place to encounter truth. Again, due to the nature of the subject matter, this encounter is never automatic. Truth occurs only to the degree that the gospel is present as a coercive reality, creating an echo of elective grace.

The collection closes with an innovative and powerful challenge from E. Radner to the authors to reorder their theological vision according to the spirit of the Nicene Creed, which is integrally tied up with the legal issue of church order. If truth and community are intimately connected (Lindbeck), what would it look like if the Church's “canon of truth” were seen as implicating Church “canon law”? Nicea's fundamental conviction is that truthful speech requires truthful discipleship, and in Nicea this manifested itself in a political form of “self-mortification” designed to limit moral pride amongst bishops and laity. In short, the divine truth of the Creed is mirrored in common discipline. The evangelical significance of this self-ordering is that it represents God's character in the world. Ecclesial self-mortification makes space for the divine assertion of Christ's own gracious form upon his body. Yet disunity is not only an obstacle to evangelism. Our yearning as theologians for truth has been “disordered into incompetence.” Disunity is “a fundamental obstacle to our grasp of the truth ... creedal Christianity is unable to hold the object of its desire” (227). The solution is to follow James 4:2-3 and learn to “desire rightly, for such right desire—the desire of personal and institutional mortifying order—is the opening of grace by which the way forward in unity can be discovered” (228).

These brief summaries can only be a hint of the richness of the content of each essay, which alone make the book worth buying. They “carry” the treatments of the individual articles of faith by giving them a broader context in the life of the church, challenging them to make sense of our current disordered context. Stay tuned for the rest of this review.
Posted by Phil Sumpter at 15:36

(VIDEO) Why your ex will NEVER get back...