The Nicene Creed - some interpretations 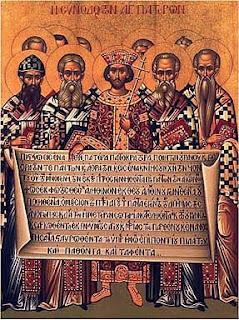 In my book review of Brazos Presses' Nicene Christianity, I summarized those articles dealing with the nature of creeds as such and their role within the life of the Church. In this post, I outline the rest of the essays in the book, each of which deal with a different article of the Nicene Creed.

How can Jesus' pre-existence be considered “incarnate,” a logical necessity if we do not wish to posit two separate identities for him? Jenson's answer has to do with the nature of the place he came from: heaven. Heaven is part of creation, yet not as another piece of space but as the future mode of the final kingdom. Jesus comes to us from this created eschatological future in the power of the Spirit, who is the agent and power of that future.

Sounds rather 'Back to the Future'-ish. Is he getting this just from the necessities of his metaphysics of time, or is it actually exegesis-driven?

I have to admit, I found this a difficult artilce (though the most difficult was Gunton's). Despite the abstraction, however, Jenson does reference the Bible a lot. He uses exegesis to argue that heaven itself is part of God's creation (his pied a terre) and that it breaks into our dimension of reality at specific points ("gates," as he calls them; e.g. temple, the church, the eucharist ...). That what is on the other side of the gates is "the future of mode of the kingdom" is asserted in terms of the Apocalypse: "Consider what John the See saw when the firmament-gate of heaven opened and he was permitted to look through. What he saw was "what must take place after this": he saw the future, as the Spirit anticipates it for and in God's triune life" (81). From this he concludes: "Heaven is a mode of God's final kingdom, which is the future of creation. For God also this is truly future and ins not simply dissolved into a timeless present. ... Just as teh kingdom will be created reality, it is creation also in its present availablility to God and can then, in turn, be the part of creation in which God chosses to dwell for us and from which he comes to us."

Does that make sense? Does it sound plausable? You are the systematic theologian, after all! I'd love to hear your wisdom on the subject.