What is the "reality" of the Bible? 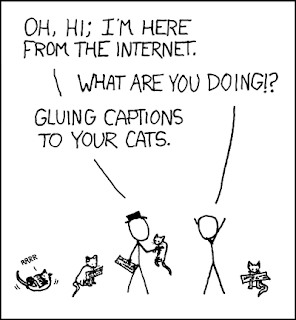 In response to my post on the need for ontological categories in biblical exegesis, Douglas Dobbins of en christo has asked an important question: how does one know when one has identified the reality to which the Bible points?

My aim today isn't to answer this question, only to sharpen its point. If exegesis is to wrestle with the the reality to which Scripture points (according to its genre as kerygmatic witness), then how does one access it and then verify whether one has identified it? This is an issue that is often simply ignored by those who like to imagine themselves as doing "objective" research. As Childs says,

“Seldom has the issue of the substance of the witness, that is, its reality, been dealt with above board and clearly, but rather some sort of assumed hermeneutic has been silently approved" (Biblical Theology, 80ff.).

Here are the examples he provides us to help make his point:

(1) G. von Rad's form of Heilsgeschichte as a history of continual actualization of tradition assumes that there is a reality lying behind the various witnesses which emerges in ever greater clarity at the end of the process, but which can also at times be anticipated through typological adumbration. Yet the reader is given only vague hints of what is theologically involved. In his final chapter (Old Testament Theology, II, 319ff.) von Rad is forced to fall back to several traditional, but often conflicting, schemata (Law/Gospel, prophecy/fulfilment, letter/spirit) in order to relate the Old Testament's substance to his christological model (cf. Oeming, Gesamtbiblische Theologien, 58ff).

(2) R. Bultmann's search for the reality behind the New Testament's witness assumes it to be a mode of authentic existence which is described by means of modern existentialist categories. Only those New Testament writers who appear compatible to this move provide vehicles for an authentic voice (Paul, John) while many other New Testament authors are rendered largely mute by means of critical deconstruction (Luke, Pastorals, II Peter, Revelation).

(3) P. Tillich speaks freely of the reality of the New Being which conquers existential estrangement and makes faith possible. Jesus as the Christ is the symbolic expression of this New Being, and the biblical portrait of this symbol mediates a knowledge of God. Participation, not historical argument, guarantees the event on which faith is grounded as a sign of the continuing transforming power of this reality once encountered by Jesus' disciples. That the Old Testament plays a minor role here is apparently taken for granted.

(4)Again, many modern 'narrative theologies' seek to avoid all dogmatic issues in the study of the Bible and seek 'to render reality' only by means of retelling the story. (Hence the agreement of both liberals and conservatives regarding the centrality of narrative, but who disagree concerning the nature of the 'old, old story'.) The move has recently become popular of inviting the reader to enter the fictive world of the biblical text, a realm of symbolic language, which evokes new imagery for its hearers. Clearly an assumption is being made regarding the nature and function of the Bible which privileges the genre of story over against those other biblical forms of psalmody, law and wisdom.

(5)Finally, many modern biblical scholars have been attracted by a hermeneutical theory such as that proposed by David Kelsey (JAAR, 585ff.) who defends the position that the Bible's authority does not rest on any specific content or property of the text, but lies in the function to which biblical patterns have been assigned by the 'imaginative construals' of a community of faith. One cannot rightly attack the consistency of the theory, but the theological issue turns on whether one can do justice to the function of scripture when it is so loosely related to its subject matter, that is, to its reality.

I hope to give my own thoughts soon.

I also hope this begins to highlight the naivety of the outdated categories of liberal/conservative recently employed by N.T. Wrong in his attempt to "figure out" his colleagues. For more on this, see Paul Minear's work.
Posted by Phil Sumpter at 17:16

Interesting post, but I think you confused me with someone else. At least I don't remember asking that question. Though I agree completely with the importance of the question that Douglas Dobbins raised.

I am looking forward to reading your coming thoughts on this question. I actually wrote more than what I have posted, but I deleted it. In some ways, all those scholars that you mentioned seemed to offer unhelpful proposals. My critique of them all, in short, is that they seem to be detaching meaning from history, and rooting it in the human heart (I hope that is not too crude of an analysis).

I personally have not read Kelsey, but his view of biblical authority, where authority does not reside in any specific property or content of the text, seems unhelpful from a historians perspective. For I believe that, if we were to examine the Pentateuch, comparing it with ANE international treaties, particularly mid 2nd Millenium Hittite suzerain-vassal arrangements,we would find that part of the Pentateuch's authority, both in the property of the text (suzerain-vassal treaty structure) and the content (the specifics of the preamble, prologue, stipulations, blessings and cursings) are the historical loci in which the divine authority of the text is invested. This would be the case no matter how a particular community imaginatively construes the text.

As usual, its a thought provoking post. I receive Childs's caution to beware of a mock "objectivity" but I am hoping that there is a better way to exercise this caution than that which is offered by those listed.
Thanks again Phil. - Doug

p.s. I don't mind being confused with Douglas Mangum (just don't ask me to translate Syriac!).

Two Douglases! I'm so sorry. Douglas M., I still owe you that response on Childs. I'm drowing in work at the mo. Douglas D., I will try and get back as soon as I can. Thanks for your thoughts.

Cheers, Doug. I'm currently having three Internet conversations at once and I'm not sure when I'll get round to answering you question. The answer, I think, has to do with community and the Holy Spirit. On the one hand, the reality to which Scripture points is a reality that can only be comprehended by viewing it as part of the whole, along with logical deductions that can be made from that (the creed's affirmation of the eternal generation of the Son from the Father, for example, cannot be read off any text of the Bible, but it makes sense when the whole is taken into account and its interior dynamic is taken to a logical conclusion). This reality is not obvious. It's hidden in jars of clay and so we need the Holy Spirit to open it up to us (just as Jesus opened up the Scriptures). He does this in various ways, but one major way is through the community of the church. The church converts us, trains us, is the community into which we enter. So reading scripture critically in the context of church tradition, which confesses to have grapsed - or better been grasped by -the reality of Scripture is the only context out of which true interpretation can take place (I mean true, I don't mean ecclesial or private, as if academy and church can be separated; though the latter still has lots to learn from the former, just as the Church has lots to learn from the Synagogue).

In terms of the options Childs cites: von Rad is right to assert his form of progressive revelation, he is wrong not to take the editorial activity of the final tradents into account as a vital part of that revelation. This is to ignore the "church" side of things ("church" here meaning the "community of faithful editors, writing for future generations of the faithful"). Bultmann's problem is that his Gopsel is not the Gospel of the church, so he places himself outside of the community. He may be right, but the result is not, as far as I can see, "Christian" is any historically meaningful way (I could be corrected here). The same applies to Tillich, who, like Bultmann, simply goes his own way and ignores what the Church has proclaimed. Narrative theology underplays the role of the Spirit, whose function is to open up Scripture so that it can point to something else, i.e. God. The Bible is not self-referential in any ultimate sense. Finally, Kelsey would also seem to ignore the function of the Spirit, who speaks to us from Scripture and coerces our response, rather than Scripture being a malleable tool in the hands of a church that has the authority to do treat it as it pleases.

Those are my thoughts for the moment. I'm not sure that von Rad is detaching meaning from history, as the meaning of the text is located in its tradtion-historical devlopment. Narrative theology also locates meaning in a "history," now narratively conceived (Geschichte rather than Historie). Kelsey locates meaning in the community, rather than the heart; Tillich and Bultmann locate it in some kind of subjective exiistential disposition. I'm not sure where I would locate meaning ... I'm up for different levels of meaning which would probably touch on all of them (literal, spiritual). I agree with you that there is some kind of objectivity to biblical authority, so that it stands over and against the church.

I hope my thoughts make sense! Feel free to critique