Quote of the day: Some Rabbinic logic 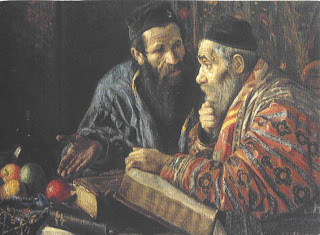 I randomly opened Neusner's translation of the Mishna today, and came across the following quote. I don't want to make any kind of statement by posting it, I just wanted to record it as an interesting example of rabbinic logic. And as a reminder of how foreign that world is to me.

4:7 A. They asked sages in Rome, "If [God] is not in favor of idolatry, why does he not wipe it away?"
B. They said to them, "If people worshipped something of which the world had no need, he certainly would wipe it away.
C. "But lo, people worship the sun, moon, stars, and planets.
D. "Now do you think he is going to wipe out his world because of idiots?"
E. They said to them, "If so, let him destroy something of which the world has no need, and leave something which the world needs!"
F. They said to them, "Then we should strengthen the hands of those who worship these [which would not be destroyed], for then they would say, 'Now you know full well that they are gods, for lo, they were not wiped out!'"
Now I think about it, I have made an attempt to find parallels between Jewish and Christian thought in my post on The Talmud on "costly grace."
Posted by Phil Sumpter at 12:53

Email ThisBlogThis!Share to TwitterShare to FacebookShare to Pinterest
Labels: Judaism