A Christian response to an image by Elie Wiesel? 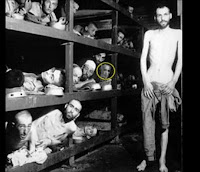 I don't mean response in the sense of a thought out intellectual argument (though that would be nice), but in the the psychological sense of, "What do you think, see, feel, etc. when you read the quote I am about to post below?" It's a gut reaction kind of thing. I'm only asking for a gut reaction (though secretly I want a profound theological answer), because I think the subject matter of this quote is so utterly profound that anyone who presumes to be able to have grasped it is making a bold claim indeed. There are some things, it seems to me, that will remain a mystery and maybe ought to. Even though all of us are just yearning to know the answer. I am - so if there really is a thought out intellectual response to this then please let me know. I would really like to know.

Here's Wiesel's quote, which I garnered from John's list of holocaust survivor quotes. I've not read Wiesel before, but eruptions from the soul such such as these point to a man who is worth it.

Wiesel (located in the photo above) describes one of the worst days of his life in Buchenwald concentration camp. It was the hanging of a young boy. Read the details in the second quote from top here. The quote concludes with the following:

His tongue was still read, his eyes were not yet glazed. Behind me, I heard the same man asking: 'Where is God now?' and I heard a voice within me answer him: 'Where is He? Here He is--He is hanging here on this gallows . . . '

On the basis of his comments in the quotes mentioned, Wiesel would seem to be an atheist (he eloquently describes his death of God experience in the first quote here, though see the comments to this thread which refute this). But should a statement like this lead one to think so? That's the crazy thing ... when I first read this my gut reaction was, "Oh, he's a Christian." Of course, I soon readjusted my interpretative lens and figured out that he meant something else. God did die, in some sense, on that noose.

But that that is exactly what Christians believe, isn't it? The King of Glory, the Creator of the Universe ... hung on an instrument of death and torture, died, and went to Hell.

This event meant something profound for Wiesel; as far as I understand, he's spent much of his life trying to process it. As for me, I'm still trying to figure it out, though in my own, odd, Christian way. This is one moment where I realize that true theology is always faith seeking understanding. I believe it, but I don't understand it (and I oddly find it comforting at the same time).

Do you? Please explain.

[p.p.s. here are some other relevant quotes, Lenten ones in German]
Posted by Phil Sumpter at 19:52

When we first heard of the destruction as children of the 50s (I was born in '45) the impact of the horror was on the movietone news which we would see when we went to the cinema. I knew immediately that people could do such things. I don't remember thinking blame as a child but almost a disembodied mechanics - yes you too are made of flesh and bone - you too could be destroyed by accident or by design.

Just now I am working my way through my own translation of Job - one thing I have noted but not proven - Job addresses God. The others only talk about 'him'.

You're right - this is profound.

On the surface, there's an answer in the collaboration of Wiesel, the author - autobiographer, with his Christian friend Francois Mauriac, who is also an author and the one who writes the forward to Night, where he discusses the very incident of the quotation in Christian terms even. Wiesel did not protest the forward one bit.

But, when they first met, Wiesel said of Mauriac (in a conversation that led to the publication of Wiesel's book):

"He spoke so much about Christ," says Wiesel. "I was timid, but finally I said, 'You speak of Christ's suffering. What about the children who have suffered not 2,000 years ago, but yesterday? And they never talk about it."

What's absolutely profound to me is the collaboration of these two very different men. Might such humanism be something theological too?

First, to clarify, I am pretty certain the man standing in that picture is NOT Wiesel. He is in the picture, yes, but he is in the background in the lofts, on the right side.

Second, I would quibble with calling Wiesel an atheist. I would recommend reading much of his work; my understanding is that he still believes God exists, just that his conception of God was utterly transformed during the Holocaust. Elsewhere Wiesel has said he still prays to God, but only with questions. I have also read a prayer he spoke at a memorial ceremony at one of the camps, that goes something like "dear God, do not forgive those who perpetrated the crimes here" which is of course a take-off on Jesus' words on the cross--Father forgive them, they know not what they do. I don't think Wiesel is an atheist--he just sees God as emerging from the flames of Auschwitz scathed. I think he is right.

Sorry this is not more profound . . . I had my first day of comps this morning.

more agnostic than atheist. you should read his trilogy. i have read through twilight. very moving a/c.

He also has a two volume memoir: All Rivers Run to the Sea and And the Sea is Never Full. That would, obviously, give you a better sense of the autobiographical side of things; the majority of what he has written is narrative 'fiction' (and I hesitate to call it 'fiction'), but definitely novels. They are still, however, wonderfully wonderfully moving.

Job would seem to be a relevant book for this. His rhetoric is shocking: he describes God as his enemy who tortures him and God allows himself to addressed as such. It's almost as if Job presents God as the Nazis in Wiesel's story ... don't you think?

thanks for your thoughts. "Might such humanism be something theological too?" It surely is, but on a different level, I think, than God freely letting himself be unjustly executed. This is the mystery that I want to understand. Understanding this mystery may help encourage the development of such humanism (I believe Jüngel says stuff like this).

thanks for the tips, I've updated my post. Wiesel's comments on prayer remind me that Derrida (another Jew with an ambiguous relationship to God!) said something similar on the same subject, though I forget what. About this comment: "I don't think Wiesel is an atheist--he just sees God as emerging from the flames of Auschwitz scathed. I think he is right." I wonder if, theoretically, we needed the Holocaust to see this. Although I am of the opinion that the Holocaust represents the single worse case of its kind in history, the kind of imagery it evokes is found throughout the Bible (women eating their children out of starvation, for example). And shockingly it is attributed directly to God as its sole cause. I think that Holy Scripture already presents us with a picture of God that is, according to our canons of morality, scathed - with or without Auschwitz ...

I've updated my post. This has all wetted my appetite to read more of Wiesel.

God as Nazis - no. God is good but not as we define good. Job does not present God as the Sabeans or Chaldeans. Neither does Isaiah in his weal and woe or evil in the city and I YHWH have not done it passage. Where do we meet God as love? At the mercy seat or throne of grace - shades of Derrida but I will stay off his scapegoat thesis for a moment. On a lighter note the joint old-man-Voldemort and new-man-Harry Petter make an interesting study of human evil in the Order of the Phoenix.

I think we can go with human evil as an issue, but we cannot ascribe evil to God without losing something vital - the real opponent that we have who affirms our reality in ways we cannot say - so I support Job's repentance (He uses the word NXM for the second repentance - identifying God with Job) and Harry Potter's happy ending.

On God, the Hebrew Bible, and the Holocaust, see Marvin Sweeney's recent volume published by Fortress, entitled something like Reading the Hebrew Bible after the Shoah. I will be reviewing it on my blog once I get time.

I am having a little trouble with your "God did die for him on that noose". Do you mean Jesus or the boy? I haven't read this in a while, but i think this is where the idea of 'hester panim', God hiding His face, comes in to play. This is something I have come across in Jewish literature.

you are a great bibliographic resource, thanks!

I've updated my post to make it less ambiguous. I just meant that God had died as far as Wiesel was concerned. I now realize that that was false so I've updated that too. Someone contacted me offline and informed me of the concept of hester panim, something I will have to look into.

I look forward to the day when we will be able to understand everything (is that an eschatological promise?).

Certainly, we cannot talk about the Holocaust and eschatology. At least post-Holocaust theology says we can't (and I agree).

Certainly, we cannot talk about the Holocaust and eschatology.I'd love to know what you mean by that. Do you mean that we oughtn't use eschatological speculations to explain present catastrophies, or that the Holocaust denies the existence of eschatology as such? (I can understand the former but not the latter).