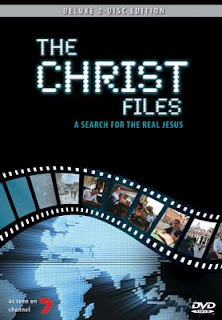 Due to extended discussion on the Biblical Studies List I've not got time to continue my literal/spiritual sense thread today. Instead, a fascinating video clip on an up-and-coming documentary on the "historical Jesus". Here's the blurb:

Have we lost sight of the real Jesus in our busy lives? Is our Saviour so buried by tradition and fable that he has become insignificant to people living in the 21st century? In a captivating journey across the globe, Dr John Dickson examines ancient documents and consults the world’s most respected historians in search of Jesus of Nazareth.

What is most fascinating is the impressive list of academics interviewed in the course of the films making:

Professor Richard Bauckham of St Andrew’s University, Scotland on the Gospels and Eyewitness Testimony
Professor Marcus Bockmuehl of St Andrew’s University, Scotland on Gnosticism and the Gnostic Gospels
Professor James Charlesworth of Princeton University, USA on the Dead Sea Scrolls and Jesus
Professor James Dunn of Durham University, England on how ancient societies preserved traditions aurally
Professor Sean Freyne of Trinity College, Dublin on the Archaeology of Galilee (filmed on location in Israel)
Professor Martin Hengel of the University of Tübingen, Germany on the historical value of the Gospels
Professor Alanna Nobbs of Macquarie University, Australia on the Greco-Roman sources for studying Jesus
Dr. Adolfo Roitman of Shrine of the Book, Israel on the discovery of the Dead Sea Scrolls
Professor Peter Stuhlmacher of University of Tubingen, Germany on the Apostle Paul and the value of his letters for the study of the historical Jesus
Professor Christopher Tuckett of Oxford University, England on the source behind the Gospels, such as ‘Q’
Right Reverend Dr. Tom Wright, Bishop of Durham, England on the importance of the Old Testament for understanding the historical Jesus

Unfortunately, it looks as if it's only being aired on an Australian channel this Good Friday. Looks as if I'll have to buy the DVD.

For samples of interviews with Bauckham and Wright, go here. (HT: Chris Tilling)
Posted by Phil Sumpter at 15:14

NPL is exactly the same age as I am - both bawling infants on the same day. I can still ride my bicycle to work though - his kids won't let him - too dangerous in Copenhagen. That is reason enough to pray for him

Hey Bob, I didn't know you were on the list. I have to say, NPL's last comment did bite. The worst thing is when I write responses and Jim doesn't publish them. He usually does, but then he often closes threads down without posting my response (as in this case). Thanks for the support :)

OK, to be fair, in this discussion two of my three responses have been published.

I 'know' several of the players from this and other lists. (I love Dennis when he gets on to gardening - but in theology, ... O well.) The challenge in communications is a good one - and the serious parry and thrust is useful for anyone to sharpen skills. Still, I don't believe it is necessary to defend some assumptions with 'violence' - the kingdom suffers violence and the violent take it by storm - here's a challenge - write a piece for April's latest competition that includes that verse and the 'what does Athens have to do with Jerusalem?' - the violence is in the mode of approach to argumentation - Our God is not violent.

I'm asking myself if it's OK be sarcastic in response ... Hmm. Probably not.

Don't stoop to that. You're not the only one fed up with the anti-confessional polemic. There is a basic lack of courtesy on that list. I'm only maintaining my membership until after the Bauckham-Ludemann debate.

Thanks Jonathan. I don't think it makes too much difference how I react. Half of my responses don't get through, leaving the others with the final word.

I'm looking forward to the debate, though I haven't read the book yet. Tilling did a thorough review of it a while back, so I might flick through that instead.

Do you guys think I went over the top?

Phil--thanks for bringing The Christ Files to our attention. Looks like really fascinating stuff--must get a copy.

No - you weren't over the top but you didn't need to make the point - I was looking at a new online article from 1957 or so - very early reasoning about the DSS, but a very unnecessary defense of Christianity as 'unique'. I am entering a phase of being unable to speak - grammatically inarticulate - I hope it is a passing phase brought on by learning Hebrew in old age. But often it is a lead into silence - a mode of speech that is remarkable - just look at that Beloved Disciple in Primi Discipuli - he is seen in his silence.