The Difference Between "Scripture" and "Canon" 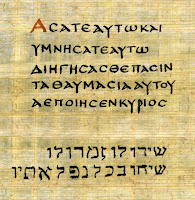 In discussions of the canonical approach, a failure to distinguish between the categories "scripture" and "canon" can lead to confusion. I hope today's thoughts help clarify the issue ...

Whereas both categories refer to the authoritative collection of sacred writings as the vehicle for communicating the will of God, the term scripture refers above all to the divine authority of these writings. Canon, on the other hand, refers to the scope of the collection.

This distinction is important for understanding the significance of the fluidity of the Christian canon, especially respecting the tension between the narrower (Jewish) and larger (Greek) forms of the Old Testament corpus. Historically speaking, this fluidity in scope has never played a decisive role in challenging the concept of the authority of Scripture. The tensions that arose in the Reformation were dogmatic in nature and were concerned with the relation of biblical authority to later church tradition, not with the question of biblical authority per se

Although the question of scope and the role of translations is an issue, it is important not to overestimate the scale of the problem. It is not the case that the church has functioned without a scripture or in deep confusion. Rather, as Childs states, “the implication to be drawn is exactly the reverse. In spite of areas of disagreement [concerning a few books on the periphery], the Bible in its various forms has continued to function as an authoritative norm for the church throughout its history.”[*]

As with most issues misunderstood by Childs' later critics, this point was made from early on:

“The fundamental theological issue at stake is not the extent of the canon, which has remained in some flux within Christianity, but the claim for a normative body of tradition contained in a set of books.”[**]