Exegetical Obligations of the Redeemed 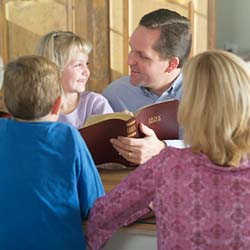 The theological reality of the relationship between God and his people and the unique role of Scripture in this relationship has left a material mark on the text of the Bible with concrete implications for today's exegete. Since the Enlightenment it has become clear that one does not have to read the Bible according to its own perspective. It is possible to understand the Bible in history-of-religions categories. Yet, despite the importance of such work, the goal and procedure of such exegetical practice are different to an approach which would read the Bible as the Word of God to his people. Belonging to this people requires that one aligns oneself with the Bible's own perspective. As Childs says:

“The biblical text must be studied in closest connection with the community of faith which treasured it. Obviously these texts can be studied from any number of other contexts and perspectives, but not as Sacred Scripture! The authority of the canon of Scripture is not a claim of objective truth apart from the community of faith but it is a commitment to a particular perspective from which the reality of God is viewed.” [*]

The exegete as member of the congregation must face a hermeneutical decision before he reads the text: as a member of a historical people with a text that has been the unfolding word of God to them through time, how do I best situate myself to receive that message today? What is the authoritative context within which the message of the Bible takes shape? Given the peculiar function of this text over against this community within the context of God's eschatological purpose, Childs would argue the text's final form.
[*] “The Sensus Literalis of Scripture: An Ancient and Modern Problem,” in Beiträge zur Alttestamentlichen Theologie: Festschrift für Walther Zimmerli zum 70. Geburtstag (Göttingen: Vandenhoek & Ruprecht, 1977), 92.
Posted by Phil Sumpter at 18:45