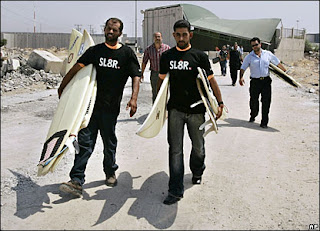 I have already mentioned the plight of Iraqi Christians here.

An interesting piece of news has been posted to the German news website heute.de concerning the recent suggestion of the German Minister of the Interior, Wolfgang Schäuble, to offer special asylum to Iraqi Christians. He plans to discuss this with his European colleagues.

Then we will give advice on how we, as Germans and as Europeans, in the alarming situation facing Iraqi refugees—especially those amongst them of Christian faith— can responsibly provide help through admittance to Europe

Young soldiers, who shoot wildly around themselves, and thereby hit an 18 year old Palestinian. Soldiers of the Kfir-Brigade who stick a fan heater into the face of an arrested Palestinian and film this with a mobile phone. A Palestinian, who had to get undressed at a check point and be beaten.

Yehuda is a religious Jew and now takes Israelis and tourists on trips to Hebron, a Palestinian village with Jewish settlement, in order to show the consequences of the violence.