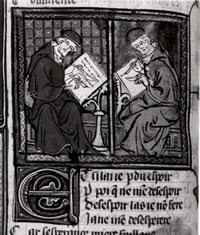 In a fascinating article from 1977 [*], Childs claimed that post-Enlightenment biblical study's exclusive focus on the historical referentiality of the text (i.e. on a particular understanding of the text’s subject matter; see here) finds its parallel in traditional allegorical attempts to push through the text to attain the text’s spiritual subject matter. The dangers of allegorical practice in drowning out the text’s plain sense find their correlate in historical criticism in the following four ways:

Second, just as within (bad) medieval allegory all control of exegesis was lost through the abuse of the multiple senses, critical Biblical interpretation has became a speculative enterprise as the fixed literary parameters of the plain sense dissolve before hypothetical reconstructions.

Third, the canonical process which shaped the text to function as Scripture for a community of faith is denigrated, as it is now assumed that there are other avenues to truth beside the tradition. The medieval parallel is seen in the tension between text and tradition.

Finally, an insurmountable gap arises between the historical sense, now fully anchored in the past, and the search for its present relevance for the modern age. The medieval parallel is seen in that attempt by some Christian theologians to abandon all concern with the literal sense of the text in order to construct a relevant theology.