The Talmud on "Costly Grace" 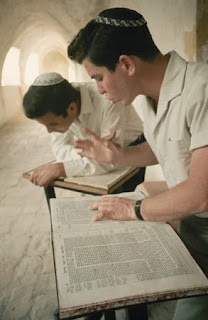 I subscribe to a weekly "eDrash," a commentary on the weekly Parasha along with a connection to a New Testament parallel. The group responsible for this call themselves "First Fruits of Zion" and believe that conversion to Christianity entails keeping the Mosaic Law, including the Oral Law. Fascinating!

I rarely have time to read their comments, but I found today's really interesting. It's a story from the Talmud and as a Christian I found it's message spot on. It illustrates the existential dimension of genuine faith. As Bonhoeffer says: "acquired knowledge cannot be divorced from the existence in which it is acquired." [*] Wanting to follow God's commandments is one thing, grasping what that actually means is another thing altogether. The difference amounts to the distinction between "cheap" and "costly" grace.

I've cut off the commentary's Christian application as I didn't find it relevant. Here's the rest:

Thought for the Week

You shall make holy garments for Aaron. (Exodus 28:2)

Once it happened, in the days of the Master, that a certain prominent Gentile, a high-ranking officer in the Roman government, was walking past a study hall in Jerusalem when he overheard the school children learning their Torah verses. The man stopped and listened for a little while. He heard the teacher reading from the Torah portion about the high priest’s special garments. He listened while the teacher read the words, "These are the garments which they shall make: a breastpiece and an ephod and a robe and a tunic of checkered work, a turban and a sash, and they shall make holy garments" (Exodus 28:4).

The Gentile did not know anything about the Bible or Judaism except what he had just heard. He stopped in and asked, "Who are these garments for?" The teacher told him, "For the high priest." The Gentile said to himself, "I will convert to Judaism so that I can become a high priest." He went to Rabbi Shammai, one of the leading sages of the Sanhedrin, and said, "I will allow you to make me into a proselyte on the condition that when I am Jewish you appoint me as high priest." Shammai was so infuriated by the man’s impertinence that he took a swing at him with a builder’s cubit and drove him away. Undeterred, the man went to Rabbi Hillel, Shammai's colleague and another leader of the Sanhedrin. He made Rabbi Hillel the same offer. Hillel accepted the terms and made him a proselyte. But he said to him, "Before a man can be made king, he has to learn about politics and government. Before you can be a high priest, you need to study the arts of governing over Israel from the Torah." The man studied Torah in preparation for becoming high priest, and as he studied, he realized that he did not qualify for the position. He could never be high priest. "Even the common Israelite cannot serve in the priesthood, but only the sons of Aaron; how much less am I eligible," he said. He went to Shammai and said, "If a stranger is not eligible to serve as high priest, why didn’t you just tell me that?" He went to Rabbi Hillel and said, "O gentle Hillel, may blessings rest on your head for bringing me under the wings of the Divine Presence of God. If not for you, I would not have become a believer."

I should let you know, in case you were not already aware, that John Hobbins has responded. And, yes, First Fruits of Zion are fascinating; thank you for directing me to this resource!

Thanks for pointing out his response. I'd never read rabbinic Hebrew before. Now I have!