What exegetes can learn from Origen 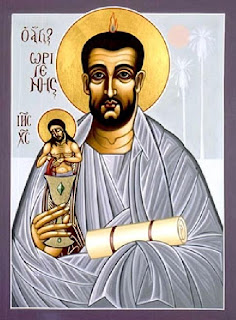 In contrast to what most people seem to think, the most fundamental category for Brevard Childs' Canonical Approach to Scripture was not a pristine, self-contained collection of writings called the "Bible." It was in fact the so-called "community of faith," the community to whom God has, does, and will reveal himself. Given this reality, the history of the development of the texts and traditions this community "treasured" (a loaded word ...) - the so-called "canonical process" - is just as important as the history of the texts' reception, the completed Bible's so-called Wirkungsgeschichte (German for "history of effects," or perhaps better in Childs' view: the "history of the coercion of the text"). Within this schema, the exegete will want to ask after the text's "function" within the "community of faith." The text is not an absolute entity, a resource of fixed propositions to be extracted and pieced together once and for all. It is rather a "vehicle" that fulfills a special role within the community, which itself fits within the broader eschatological plan of God's redemption.

Given this reality, what can exegetes in the 21st century learn from Origen? I only have time to post Childs' three conclusions, taken from his unpublished paper, "Allegory and Typology within Biblical Interpretation" (presented at St Mary's College, University of St Andrews, 2000):

1) First, Origen raised the basic issue of addressing the function of Scripture for the church which is to be a living and continuous vehicle of divine revelation.

2) Origen struggled to do justice both to the particularity of the literal sense of the text and also to its fuller, spiritual role as a divine pedagogy in hearing testimony to the salvific work of Jesus Christ to the church and world.

3) Origen raised the question as to the faithful role of the interpreter in the exercise of creative response in receiving and transmitting the truth of the Sacred Scriptures to a community of faith and practice.

He adds a quote by Frances Young, who he believes refelcts Origen's concerns, when she wrights:

Without a form of allegory that at least allows for analogy, the biblical text can only be an object of archaeological interest.

(p. 3 Biblical Exegesis and the Formation of Christian Culture)
Update: Check out this fun post from Bishop Alan. I particularly like the latin ditty from Nicolas of Lyra!
Posted by Phil Sumpter at 21:52

Phil: Where might I locate a copy of this unpublished paper?

I wonder if you saw this note by Bishop Alan

You can't, but I can e-mail it to you if you write me at philsumpter at hotmail dot com.

Thanks for that link Bob! I've updated my post.

Hi Phil, interesting post, could I ask for a copy of the article? And in fact any that relate to Childs approach to the OT.

Cheeky I know, but hey!!

If you want your ex-girlfriend or ex-boyfriend to come crawling back to you on their knees (no matter why you broke up) you have to watch this video
right away...