Jonah and the nations: a "figurative" reading 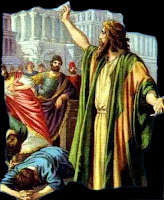 What is the correct context for interpreting the Book of Jonah, the context that gets us to the substance of its witness? The classic historical approach would locate it in its post-exilic setting and come up with something along the lines of Blenkinsopp: the forgiveness of the evil Assyrians represents "the breaking of the bond of divine causality" inside the prophetic office (Seitz, Prophecy and Hermeneutics, 147). What about its canonical/literary context, however? I've posted on Seitz's understanding of typology, both as inner-biblical literary technique as well as prophetic hermeneutical intention. What would it mean to read Jonah as a book “figured into” a larger divine history? Seitz offers the following thoughts on how the canonical “universe of associations" into which the book of Jonah “has been figured and within which it establishes its ongoing prophetic address as the fifth witness of the Twelve” (147) creates a different picture of divine forgiveness and the nations:

Yhwh is “slow to anger”—but he his also “great in might, and YHWH will by no means clear the guilty” (Nah. 1:3). Of Assyria it was ultimately said, “for upon whom has not come your unceasing evil?” (3:19). Jonah ended with a question about divine compassion. Nahum ends with a question about worldly power and its capacity to look divine grace in the eye, as well as an episode of true repentance, and then carry on according to its own dark designs. Here Nahum is telling no detached theological truth, but is speaking of the way of worldly power as it moves through the chapters of history. And Habakkuk sees a worse chapter coming than the one about which he registered his initial complaint (1:2).