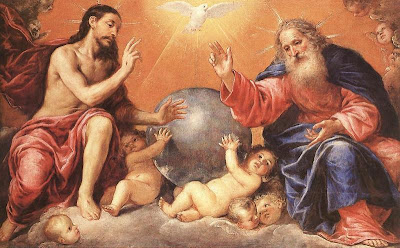 A certain Paul wrote an interesting response to my post yesterday on The Nature of the "Substance" of the Bible. I've decided to respond here, as the points he raises are important. His comments are in italics, my response beneath.
Seems to me the Bible is an anthology, multi-authored, composed over thousands of years, with some texts that are very similar and others widely disparate;
I'm in total agreement here. Yet the line of continuity between all these texts is that they have been used religiously by a particular community of faith throughout its history as a testimony and response to its God. Diversity and even logical contradictions don't exclude the possibility that there is one God behind it all, revealing himself to and guiding his people. Which is why, I think, Childs talks of the “substance” of the Bible as being “dynamic,” i.e. God in relationship in history. The central formulae of both Jewish and Christian faith are narrative in nature, rather than abstract description. Irenaeus, for example, spoke of a movement from “creation to incarnation to consummation.” The task of exegesis, an exegesis which wants to really get to the subject matter of the Bible, is to read each text both in its integrity as well as in relation to this (or another) broader picture. Christians believe in the Irenaen one. Others have other “meta narratives” by which to combine the parts into a whole (e.g. Marxist, existentialist, evolutionary, etc.).
the "substance" is always going to to be those elements and aspects that the particular theologian finds most meaningful and prefers to emphasize.
Subjectivity in exegesis is unavoidable. Bultmann, for example, chose to identify the existential dimension of the text as its “true” referent. Working with a Heideggerian understanding of this reality he then sifts out those texts which best accord with its truth claims (at least, that's what I see Bultmann doing ...). I think, however, that some ground rules are necessary, “boundaries of interpretation” or “a rule of faith.” This will depend on your confession, but Christians (of which I am one) not only confess that the Bible is Scripture and as such testifies to God (i.e. it is authoritative), but that it is a “canon,” i.e. a fixed rule which provides the boundaries within which theological exegesis can take place (I posted on this distinction a couple of days ago here). This canon provides the outer limits for exegesis, both a negative criterion marking the boundary between orthodoxy and heresy and a postive criterion, delineating the boundary within which diversity is allowed to flourish. Bultmann's problem, as far as I can see, is that he does not respect that “canonicity” of Scripture, in that he only selects certain strands as proclaiming “true existence” and he denigrates the Old Testament to the status of evolutionary precursor.
Which is why the potential for theological debate is truly eternal
I guess so, but it's not arbitrary. It's a matter of subjectivity within boundaries guided, hopefully, by the Holy Spirit.
Posted by Phil Sumpter at 10:59

Just to say I agree -