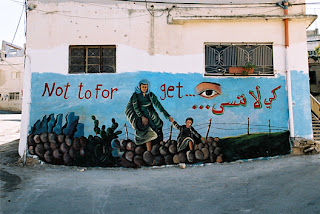 “Palestine remains more an idea than a state, and the battle to control its destiny is waged in coffee shops and classrooms, hospitals and mosques, and, through the waning months of 2006 and into early 2007, in bloody street battles between Hamas and Fatah supporters. Memories die hard in this troubled terrain, and the relative calm initiated in February by a fragile agreement to pursue a unity government is unlikely to erase the chaos and the killing that immediately preceded the new détente. Many believe that attempts to forge a unity government and institute democratic rule are premature when the occupation remains a stubborn fact and Palestinians are experiencing a collective identity crisis.”
—from Richard A. Johnson’s “The Hamas Dilemma,”, The Walrus Magazine
Posted by Phil Sumpter at 19:07