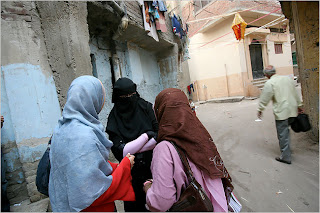 That's what's happening according to this interesting article by the New York Times. The cause would seem to be despair in the face of poverty, disallusionment and political corruption or ineptitude.

Mr Sayyid's comments would appear to be typical:

“Nobody cares about the people,” Mr. Sayyid said, slapping his hands against the air, echoing sentiment repeated in many interviews with young people across Egypt. “Nobody cares. What is holding me back is the system. Find a general with children and he will have an apartment for each of them. My government is only close to those close to the government.”

Mr. Sayyid, like an increasing number of Egyptians, would like Islam to play a greater role in political life. He and many others said that the very government that claimed to elevate and emphasize their faith was insincere and hypocritical.

“Yes, I do think that Islam is the solution,” Mr. Sayyid said, quoting from the slogan of the Muslim Brotherhood, a banned but tolerated organization in Egypt that calls for imposing Shariah, or Islamic law, and wants a religious committee to oversee all matters of state. “These people, the Islamists, they would be better than the fake curtain, the illusion, in front of us now.”