Reading in a Revised Frame of Reference 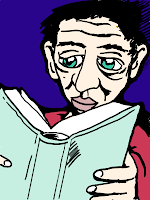 In his brilliant essay "Christ in All the Scriptures?", R.W.L. Moberly asks, "What should a Christian be trying to do with the OT at this moment in history?" He is thinking of our postmodern context, a context which "does not wish to dispense with science or technology as such ... but that is rethinking their significance within the overall scheme of things" (91). Here are his suggestions for reading in a revised frame of reference:

1) Being a good historian should no longer be a prime requirement of biblical study but should should merely be one important ingredient among others needed in the pot to produce nourashing fare. This is not least because the content of Scripture has to do with moral and spiritual realities, which require moral and spiritual literacy if they are to be handled well. As Stephen Fowl and Gregory Jones have put it, in a groundbreaking study, "the interpretation of Scripture is a difficult task not because of the technical demands of biblical scholarship but because of the importance of character for wise readings." [*] The rationality that one needs is informed not just by the technical mastery of intellectual skills but also by the moral and spiritual disciplines of the church.

2) Christ must be not only the light to which we look but also the light by which we see. Israel's texts that speak of divine sovereignty and grace, human sin and repentence, and the calling of israel to covenant faithfulness should be come more luminous, for Jesus embodies (in various ways) that of which the texts speak. Faith in Christ can give believers conceptual and existential resources for truer understanding.

3) Biblical interpretation needs to be seen as revolving around context. This involves recognising that biblical texts have many contexts. There is a difference, for example, between the originating context and the literary context of preservation. When Gen. 1 is read in its historical context, it may well be the product of "priestly" Jews in Babylon responding to the disintegration of their kingdom. When Gen 1 is read as part of a canonical collection that includes the account of personified wisdom, present with God at creation, in Prov 8, a further set of intertextual resonances and possibilities is set up. When Ge 1 is read as part of the Christian Bible, with the retelling of creation in relation to God's Logos/Word, then further resonances are set up. When one adds to this the Pauline account of Jesus as the image of the invisible God, and then the broader context of extended Christian engagement with the meaning of creation and humanity in the light of Scripture as a whole, then the question of context for the opening verses of the Bible is rich indeed.