Some thoughts on Bultmann's birthday 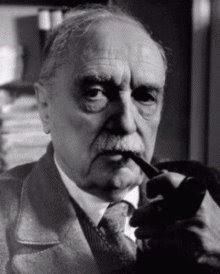 OK, it was a few days ago, as Jim has reminded us on the Biblical Studies List. Nevertheless, I belatedly share the following thoughts I jotted down while reading through Hermann Diem's most excellent Dogmatics a while ago in order to commemorate his memory, and of course be corrected by those who know infinitely better.

According to H. Diem, Bultmann's program of de-mythologization was a theological response to the challenge of historical criticism to theology. His answer to Lessing's questions of how (1) a specific historical event can have decisive significance for faith, and (2) how the historical gulf is to be overcome so that this event can affect us now, is that the two have nothing to do with each other. This then frees the historical critic to conclude what he likes about the historical reality behind the text and the theologian to construct relevant theology despite these results. How does Bultmann achieve what for the rest of Christendom was an impossibility?
He has a good hard think, reads a bunch of books, chats with his friend Heidegger and concludes that what's really bothering “modern man” is the problem of his “historicity.” It is the existential question of how I can have “meaning” in the present despite the fact that I am influenced by my past and responsible for my future. Bultmann, drawing on the hermeneutical principle of “pre-understanding,” turns to the Bible and discovers that happily there is indeed a solution to this particular problem, at least in nascent form, in Paul and John, though admittedly prepared by Jesus and the OT. That is, what really matters, what these texts really want to communicate to us, is that the grace of God allows us to be set free from our past, to existentially step outside of history, and so be able to realize ourselves.
Decisive to the validity of Bultmann's theological proposal is that this is what the NT writers themselves actually intended. Though the authors considered that the historical events were important to salvation, this was only accidental to their true motive which was existential. In the minds of these authors faith as the means of assimilating salvation was *existential* in character and as such is fundamentally separable from the assertions concerning the factuality of certain events. For us “modern men,” then, if we really want to understand the true “substance” (Sache) of the NT, need to read the texts for what they have to say about existence. Eliminating the need to believe that these events are factual actually helps us to achieve this.
What is interesting to me (if this analysis is correct) is that Heidegger's essentialist philosophy helps Bultmann to see what is there, it opens his eyes, so to speak; it helps him get to what the Bible “is really all about.” Without this broader philosophical understanding, we would be blinded by the fact that the “primitive” thought of the NT actually believed that God interacts in history. Our more developed, modern world-view would “get in the way,” and so existentialist analysis of being helps us discern what Jesus and the disciples were all about.
This approach to exegesis is bolstered theologically by the claim that it is the true meaning of “justification by faith alone.” Regardless of the correctness of this interpretation of dogma, or of Heidegger's philosophy, is it not the case that Bultmann is as dependent on his ideology for exegesis as any other human, whether secular interpreter or Southern Baptist fundamentalist?
The solution to good exegesis is not to try and “stop being ideological” but rather to develop a good, healthy ideology.
P.S. For a guy who claims to have discovered authentic existence, he certainly looks grumpy!
Posted by Phil Sumpter at 18:23

I'm no theologian, but it sounds like academic gnosticism to me. Is this your view, or just you describing Bultmann's?

Either way, thanks for explaining this, Phil.

I'm not sure whether Bultmann's theology leads to gnositicism. My main interest here is what undergirds his approach. What do you see that's gnostic?

I jotted these thoughts down after reading Bultmann's Jesus Christ and Mythology and History and Eschatology. I'm not sure these are his major works, so I couldn't comment on his approach in general.

Sorry to be dense, Phil. I only meant gnosticism metaphorically, as in the seperation of the physical (history) and the spiritual (theology). I've been trying for a while now to figure out why this is so prevalent. So you've given me a lead. Thanks again.

You're certainly not dense, Bill! I think I heard N.T. Wright making similar statements about Bultmann and gnosticism, and one of the complaints made by Childs in regard to the Jesus Seminar (which is led, I believe, by some of Bultmann's students) is that many of the old heresies pop up again "in dreary monotony." I think you're on to something.

The Childs quote is here

Yup. (breathes in hard, puffs out chest, shifts in stance) Me and Tom. (cracks) Bwah-hah-ha!

Thanks for the link. I remember that quote and I still like it.